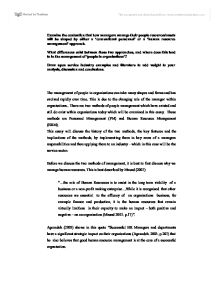 Examine the contention that how managers manage their people resources/assets will be shaped by either a 'conventional personnel' or a 'human resource management' approach. What differences exist between these two approaches, and where does this lead to in the management of 'people in organisations'? Draw upon service industry examples and literature to add weight to your analysis, discussion and conclusions. The management of people in organisations can take many shapes and forms and has evolved rapidly over time. This is due to the changing role of the manager within organisations.. There are two methods of people management which have existed and still do exist within organisations today which will be examined in this essay. These methods are Personnel Management (PM) and Human Resource Management (HRM). This essay will discuss the history of the two methods, the key features and the implications of the methods, by implementing them in key areas of a managers responsibilities and then applying them to an industry - which in this case will be the service sector. Before we discuss the two methods of management, it is best to first discuss why we manage human resources. This is best described by Maund (2001): "...the role of Human Resources is to assist in the long term viability of a business or a non-profit making enterprise...While it is recognised that other resources are essential to the efficacy of an organisations business, for example finance and production, it is the human resources that remain virtually limitless in their capacity to make an impact - both positive and negative - on an organisation (Maund 2001. p.17)". Agazadeh (2003) shows in this quote "Successful HR Managers and departments have a significant strategic impact on their organisations (Agazadeh. 2003. p.201) that he also believes that good human resource management is at the core of a successful organisation. Managing people well, especially within the service sector, means happier employees which in turn means happier customers who will return in the future ensuring the long term success of an organisation. ...read more.

The employees worked harder because they knew they were being treated differently and were not being seen as workers but as individuals.. This became knows as the 'someone upstairs cares' principal (accel-team 2007). Another two differing approaches to management by HRM and PM is the way in which they deal with business goals. According to Cole (2002) PM focuses on how a business goal will affect employees before it is challenged, but HRM has a total commitment to business goals. Previously, restrictive Trade Unions meant business goals had to come second to keeping employees happy. Of course this all changed. The 1990's became known as the 'decade of the consumer' which meant that employees concerns now came second to customer needs. These attitudes light up another significant difference in the two methods, how they deal with change. PM will support change but unlike HRM it will not encourage it. Change is becoming increasing important for today's businesses. Rosenfeld and Wilson (1999) note customer's demand changes constantly and a business needs to adapt quickly if it is going to stay competitive. As mentioned previously by Boella (2001), the service sector is an ever growing industry which contributes hugely to the UK's economy every year. With over 10 million employees in the sector and the majority of them coming face to face with customers as part of their job, it is essential that they convey the best image possible of the organisation. As mentioned before, Mound (2001) describes the strongest resource an organisation has is its human resources and when managed well can have the largest impact on an organisations success. One company's who takes great pride in their image by looking after their employees, is John Lewis. John Lewis is major UK department store with 23 shops across the country. An article entitled 'The ethical route to service quality at John Lewis Partnership' by Dandy (1996) ...read more.