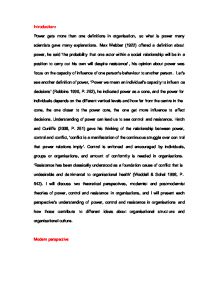 I will discuss two theoretical perspectives, modernist and postmodernist theories of power, control and resistance in organisations,

Introduction: Power gets more than one definitions in organisation, so what is power many scientists gave many explanations. Max Webber (1922) offered a definition about power, he said 'the probability that one actor within a social relationship will be in a position to carry out his own will despite resistance', his opinion about power was focus on the capacity of influence of one person's behaviour to another person. Let's see another definition of power, 'Power we mean an individual's capacity to influence decisions' (Robbins 1990, P. 252), he indicated power as a cone, and the power for individuals depends on the different vertical levels and how far from the centre in the cone, the one closer to the power core, the one get more influence to affect decisions. Understanding of power can lead us to see control and resistance. Hatch and Cunliffe (2006, P. 251) gave his thinking of the relationship between power, control and conflict, 'conflict is a manifestation of the continuous struggle over control that power relations imply'. Control is enforced and encouraged by individuals, groups or organisations, and amount of conformity is needed in organisations. 'Resistance has been classically understood as a foundation cause of conflict that is undesirable and detrimental to organisational health' (Waddell & Sohal 1998, P. ...read more.

Power and Control Power is 'the multiplicity of force relations immanent in the sphere in which they operate and which constitute their own organisation' (Foucault, 1978). Foucault explained that power can shape human's sense and relate each other in an organisation, so it can be seen as a social phenomenon. Power is everywhere in our world, it is scattered to our personal, social, political or organisational life. Disciplinary power and self-surveillance can explain postmodern concepts of power and control. Hatch and Cunliff (2006) gave Foucault's idea about the relationship between disciplinary power and self-surveillance. Foucault thought the expectance of control contributes to self-surveillance. So some theorists have suggested that Foucault's idea of disciplinary power can be used in our everyday life and organisational life, but some of postmodernists also argued about this, they see power and control as involved in our social relations and the interactions between humans, not just depends on some particular positions in society or organisations. Finally, power and control are not offensive each other, they are shared and be used in our everyday life in social, political, or organisational area. Clegg and Kornberger (2003) thought that postmodernism and modernism are related, postmodernism cannot be without modernism, Clegg and Kornberger (2003) ...read more.