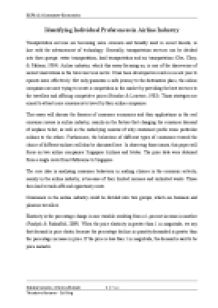 ﻿ECF3121 Consumer Economics ________________ Identifying Individual Preferences in Airline Industry Transportation services are becoming more common and broadly used in recent decade, in line with the advancement of technology. Generally, transportation services can be divided into three groups: water transportation, land transportation and air transportation (Gee, Choy, & Makens, 1984). Airline industry, which this essay focusing on, is one of the discoveries of newest innovations in the travel services sector. It has been developed so much in recent year to operate more effectively. Not only guarantee a safe journey to the destination place, the airline companies are now trying to create a competition in the market by providing the best services to the travellers and offering competitive prices (Hensher & Louviere, 1983). Those strategies are aimed to attract more consumers to travel by their airline companies. This essay will discuss the theories of consumer economics and their applications in the real consumer issues in airline industry, mainly on the factors that changing the consumer demand of airplane ticket, as well as the underlying reasons of why consumers prefer some particular airlines to the others. Furthermore, the behaviour of different types of consumers toward the choice of different airlines will also be discussed here. In observing those issues, this paper will focus on two airline companies: Singapore Airlines and Jetstar. The price data were obtained from a single route from Melbourne to Singapore. The core idea in analysing consumer behaviour in making choices in the economic activity, mainly in the airline industry, is because of their limited incomes and unlimited wants. Those then lead to trade-offs and opportunity costs. ...read more.

His optimal consumption choice is at B (and then D) now. At this time, the consumer can purchase larger units of tickets (from X1 to X2 to X3). It can be seen in the income-consumption curve that the slope is upward, because as income increase, the consumption of both airplane ticket and other consumption increase. Graph 6. The effect of a change in income level On the other hand, when there is a change in product?s price and income level held constant, there will be an intercept rotation on the budget line. Recent condition in the airline industry is many companies try to attract more consumers to purchase the airline tickets from them by cutting the airfares. This strategy increases the competition level among the airline industry. The reduction in price of the air fares will result in outward rotation in the budget line on the ?x? axis, which represents airplane ticket. People can now purchase more airplane tickets due to lower price, representing the increase in consumers? welfare or utility level. It is associated by the movement of indifference curve from U1 to U3 by selecting point D. At this time, consumption of ticket will increase from X1 to X3. Moreover, the slope of the second budget constraint is now decreasing, represents lower opportunity cost of obtaining a unit of airplane ticket. Graph 7. The effect of the decrease in price level In most cases, consumers would like to buy more airplane tickets as their income increases, but in some cases, the quantity demanded falls as income increases, the income elasticity of demand is negative. ...read more.

The market demand curve is found by joining the points on the individual demand curves, which can be seen that it is relatively more elastic. Suppose the ticket price falls from P1 to P2. Without bandwagon effect, the quantity demanded will increase from Q2 to Q2?. However, as more passengers choose to fly with Jetstar or Singapore Airlines and think it is worth to be the first-flying choice as it is trustworthy, the bandwagon effect increases quantity demanded further to D4. Therefore, airline companies use bandwagon effect to increase the response of demand in relevance with price change. To obtain this effect, the airline companies could target its potential segment and use advertisement to build up their brand image and reputation among the market. For example, Singapore Airlines could use ?comfortable, quick and always on-time? image to attract its business travellers. And for Jetstar, the image of cheap and flexible could help the company to obtain its bandwagon effect in pleasure travellers? market. Graph 13. Bandwagon effect To conclude, the consumers? demand of airplane ticket is affected by their income, ticket price, and the demand elasticity. Business travellers prefer to travel with Singapore Airlines, even with a higher airfare. They concern more on punctuality and the service provided and their price elasticity of demand is low. In contrast, pleasure travellers are less concerned with the quality of service provided, focusing on reaching their destination with the lowest cost. Their price elasticity of demand is high, thus, Jetstar is preferred in this case. In the intense market competition, Singapore airlines and Jetstar could use the bandwagon effect to attract more passengers by building up their own brand image. ...read more.