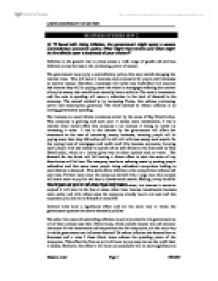 BUSINESS STUDIES H/W 2 Q: "If faced with rising inflation, the government might apply a severe contradictory economic policy. What might that involve and what might be the effects upon a business of your choice?" Inflation is the general rise in prices across a wide range of goods and services. Inflation is also the loss in the purchasing power of money. The government may apply a contradictory policy; this may include changing the interest rates. This will mean it becomes more expensive for people and businesses to morrow money. Therefore, businesses will invest less. Individual will consume less because they will be paying more else where in mortgages reducing the amount of surplus money that would have normally been available. The cuts in investment and the cuts in spending will mean a reduction in the level of demand in the economy. The second method is by increasing Taxes, this reduces purchasing power and consumption generally. ...read more.

This slows down inflation as the competition reduces and cost rises. Further more since the company started with a huge loan this increase will mean more to pay for the loan in interest each month. Making it very hard for the company to survive and may mean bankruptcy. This is just one part of the affect upon Bay Distribution, but because it wants to expand it will have to do this at some other time because investments becomes more costly and with reduce sales the company already has to cut cost and this expansion plan has to be delayed or cancelled. Interest rates have a significant effect and are the main way in which the government operates its macro economic policies. The other two mean of controlling inflation is not very suitable but government as art of their policies uses that. Direct taxes, which include income tax and national insurance for the comsumers and corporation tax for companies, are the main way in which government can influence demand. ...read more.

This leads to over trading and leads to inflation. This means that the demand reduces as the government reduces the cash in the market and meaning another factor reducing demand for drinks as consumer spending reduces. The last two policies affect the demand levels in the market and so do not really have as much affect as interest rates, which reduces the cash in people pockets. This eventually decreases demand. A company like Bay Distribution, which is trying to expand, will fail as is will be affected by the rising levels of interest rates and this will mean that it has to pay back more money for the money borrowed in the beginning. The company will fail to expand because investment becomes expensive as the cost of investment becomes high. The reason it is affected is because drink are price elastic and will be affected by the change In demand as it may be seen by most mid class people as a luxury and because the main customers are mid class people it does have a massive affect on the firms sales. UNIT6 CORPORATE STRATEGY Hussein Jasat Page 1 5/8/2007 ...read more.