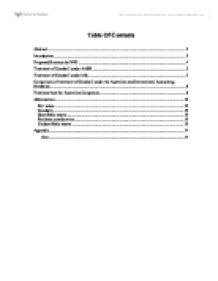 also acquire at the cost of: $75,000 The Exposure draft on Accounting for goodwill In Australia was issued in early 80s i.e. May 1983 which was consequently improved and issued as Australian Accounting standard as AAS18.This AAS18 was issued on March 1984 but before this standard there is very modest regulation or guidance for the treatment of goodwill in Australia and at that time goodwill is treated as fixed assets. In the past goodwill was treated in many ways: goodwill is written off completely against reserve or profit immediately or it is separately deducted from shareholders equity. [3] According to AASB 1013 goodwill is treated as asset only if it satisfies the following criteria of assets. i.e. (a) It is probable that the future benefits embodied in the Unidentifiable assets will eventuate; and (b) It possesses a cost or other value that can be measured Reliably. [4] AAS18 also states that goodwill that comprises the future benefits from unidentifiable assets because of its nature and it is not usually recorded separately in the accounts. The Accounting standard AASB1013 also classify between the internally generated and purchased goodwill and how these goodwill are treated. As both purchased and internally generated goodwill give rise to economic benefits, which is the one of the criteria of recognizing the asset but only purchase goodwill is recognized as an asset. 'This is principally because of the difficulty, or impossibility, of identifying the events or transactions, which contribute to the overall goodwill of the entity. Even if these were identifiable, the extent to which they generate future benefits and the value of such benefits are not usually capable of being measured reliably. Internally generated goodwill, which is not recognized as an asset will either go completely unrecognized or will be recognized as an expense."[5] And another reason is a management can manipulate the internally generated goodwill because it is in the control of the management of the entity. ...read more.

After analysis of181 Australian public companies financial statement it can be noted that there is nothing-positive consequence that IAS38 brings to Australian businesses (See appendix 1). There is quite a no of difference in Australian environment and the practices in treating and reporting of Goodwill from internationally environment in respect of Valuation of asset, Test of recoverable amount and historical cost framework. It seems incompatibility of IAS 38 in regards to Australian practice because of following reason: If we look at taxation point of view Amortization of goodwill is tax deductible in the in many European countries and as well as in US, where as amortization is not tax deductible in Australia. Therefore its economic impact on companies is enormous. The fundamental problem in accounting for intangible assets is the conflict of opinion between the historical cost and the mark-to-market approach. The Standard setting is presently leaning towards mark-to-market approach, whereas IAS 38 is clearly subjective towards the historical cost approach hence if Australian Corporate world adopt market-to-market approach mean there is need of independent valuations on each reporting date and recording increases and decreases in value directly into the results for the period as a result there is no requirement of amortization. Therefore it can be said that current Australian practice AASB1013 is better for Australian companies in the treatment of goodwill after looking at different point of views and after the review of both AASB1013&IAS38 but at the same time I can say in long term, as globalization is going around the world and hence it is compulsory for Australian companies to formulate there account which is widely acceptable and brings many benefits like (fund raising, listing of share, and world wide accepted) accounting practice. "Picker says the firm is undertaking a study to determine whether the contents of IAS 38, if implemented in Australia, would be contrary to the national interest."[12] "Paul Phenix, says: "This latest standard is difficult, and it has always been realised that it is difficult. Australia is further down the road on intangibles than other countries. ...read more.