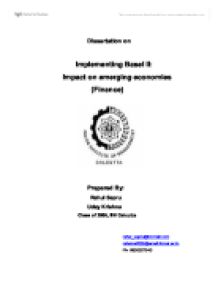 Dissertation on Implementing Basel II: Impact on emerging economies (Finance) Prepared By: Rahul Sapru Uday Krishna Class of 2005, IIM Calcutta rahul_sapru@hotmail.com rahulsa2005@email.iimcal.ac.in Ph: 9830327043 Executive Summary Over the last 25 years there has been a slow realization that what matters for a successful economy, one that delivers rapidly improving living standards for all, is not only the precise levels of interest rates or budget deficits, tax breaks for particular activities - not only the exact calibration of the instruments of policy, but also the institutions of policy. This paper is an attempt to analyze the effects of one such policy introduced by the Basel Committee on Banking Supervision. It will focus on the impact of introducing this policy in emerging economies. Although the proposed new Basel Capital Accord is to be built on 'three mutually reinforcing pillars', it is likely that the changes proposed to the measurement of credit risk (Pillar 1) will have the most far-reaching implications for developing countries. Consequently this aspect will receive more focus in the paper. The paper is organized according to the three pillars of the Basel II .The first section explores the impact of Pillar I on the Emerging economies. In terms of IRB and SSA approaches it analyzes: The impact of the accord on quantity & pricing and supply of capital to developing nations and how the accord affects the capital adequacy in emerging economies? The Second section deals with Pillar II, specifically how its implementation will help the emerging market economies (EMEs) ...read more.

Diversification benefits could thus play a major role for banks concentrating in below investment grade borrowers - either SMEs (Small & Medium Enterprises) or developing countries by providing incentives - in terms of lower overall capital requirements Changes in risk weights of selected countries under the new Accord Country Credit Rating Current Risk Weight New Risk Weight Bulgaria BB 100% 110,8% Croatia BBB 100% 44,8% Turkey B 0% 202,9% Change in the cost of funding (for borrowers currently receiving 100% risk weight) Rating Probability of Default (%) Risk Weight (%) Change in cost of funding (Basis points) BBB 0.20 44.8 - 57 BB 1.40 110.8 11 B 6.60 202.9 107 IRB would also accentuate the pro-cyclicality of bank lending, capital requirements under the proposed Internal Ratings Based (IRB) approach will tend to increase as an economy falls into recession and fall as an economy enters an expansion. To the extent that banks curtail(expand) lending in response, recessions (expansions) will be amplified which is damaging for all economies, but particularly so for fragile developing ones, which are more vulnerable to strong cyclical fluctuations of bank lending, both nationally and internationally. The quantity of loans: Strong forces resulting from the implementation of the new Accord will encourage reduction in the quantity of lending to poorer countries. These forces relate to the changed incentives that will face banks. Clearly, banks will wish to minimize the regulatory capital they are required to hold. ...read more.

Conclusion: While the Basel Committee has emphasized that the three pillars are a package, it is the design of the first pillar that has generated the greatest attention. The innovations that have been made in the approach to calculating regulatory capital will also substantially affect the implementation of the second and third pillars. But when judged from the perspective of the main market failures that should be addressed by banking regulation, the new regime outlined in the Basle II is not right. It is complex where it should be simple. It is supposed to more accurately align regulatory capital to the risks that banks face, yet in the case of lending to developing countries it ignores the proven benefits of diversification. Consequences of this will be an inappropriately large increase in the costs of such lending to developing countries, as well as a likely reduction in its quantity. Basel proposal would increase the volatility of capital needs of banks in NHICs versus high-income countries' banks. In fact, bank and corporate ratings in NHICs appear to be strongly related and in an asymmetric way to changes in sovereign ratings. A sovereign downgrading would, for instance, imply larger changes in capital allocations than an upgrading and would call for larger capital requirements at the very time in which access to capital markets is more difficult. One of the greatest challenges is the paucity of resources, particularly, human resources to cope with the requirements of Basel II. Training of bank supervisors will assume greater importance since Pillar II envisages supervisors having the expertise to assess risk management techniques/processes utilized by banks. ...read more.