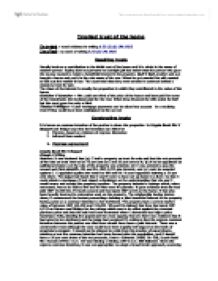 Implied trust of the home.

Implied trust of the home Express = need evidence in writing S.53 (1) (b) LPA 1925 Implied= no need of writing S.53 (2) LPA 1925 Resulting trusts Usually involves a contribution to the initial cost of the home and it is whole in the name of another person. Equity does not presume an outright gift but rather that the person who gave the money wanted to retain a beneficial interest in the property. Bull V Bull, mother and son bought a house and put it in the sole name of the son. When he got married his wife wanted to kick out the mother in law. The court held that they were tenants in common behind a statutory trust for sale. The share of the interest is usually the proportion in which they contributed to the value of the house Cowcher V Cowcher = Mrs. paid one third of the price of the house and later paid for some of the instalments the husband paid for the rest. When they divorced the wife asked for half but the court gave her only a third. Tinsley V Milligan = Later mortgage payments can be taken into account in a resulting trust if they could have been anticipated at the out set Constructive trusts It is bases on common intention of the parties to share the properties. In Lloyds Bank Plc V Rosset Lord Bridge says that the intention can either be 1. Express, based on evidence of express discussion 2. ...read more.

The court said no, it is normal for a wife to supervise the works in her husband house. * Contributing with her income to other expenses in the household. Gissing V Gissing = home was in husband sole name, he also paid the mortgage with his money. She paid for herself, their son and some furniture. When he left she claimed a beneficial interest, but she failed because there was no common intention at the time of the acquisition of the house that she should have had a beneficial interest. Burns V Burns = Fox LJ Made an obiter comment that if the woman makes a substantial contribution even indirectly it could make her acquire a beneficial interest. In the case Mrs Burns had done no contribution so she did not have a beneficial interest. * Raising the family Shares in the proceeds of sale Resulting trust= proportion to the contribution made before the purchase price, later instalments don't count. Constructive trust=it is inferred by conduct. Cowcher V Cowcher = the share of her interest was unaffected by the later instalments is just the intention at the time when the property is purchased that counts. Abstract: Rights of property between husband and wife are in principle the same as between strangers; they do not alter on the break-up of a marriage. Per curiam: It is desirable that solicitors dealing with the purchase of a matrimonial home should invariably enquire of the spouses as to their intentions regarding beneficial ownership. ...read more.

Tinsley v Milligan Abstract: Even where title to property has been acquired in a course of illegal conduct, a claimant to an interest in it may still seek to assert his claim, so long as he does not plead, or rely on, an illegality. Two parties purchased a house in the sole name of one, but on the understanding that they were both joint beneficial owners of the property. The purpose of the purchase was to perpetrate a social security fraud. When the parties fell out, P, in whose name the house was registered, asserted her right to sole ownership of the property. The other counterclaimed that she had an equitable right in it. This was allowed by the court, and P appealed. Summary: Held, dismissing the appeal, that despite the fact that the property had been acquired for fraudulent purposes, the equitable right of the claimant would stand. Reform Law commission discussion paper "Sharing Homes" says that the share will be based both on direct and indirect contribution, so the money given at the beginning and the contribution to the household expenses, without looking at inferred intention. This obviously creates certainty. So in cases like Burns V Burns where one person pays the bills and the other the mortgage the court can infer that the person paying the bills intended to acquire a share in the property. In the recent case of Le Foe V Le Foe the judge said that the fact that one paid the mortgage and the other for the day-to-day expenses was just an arbitrary way of allocating expenses. Constructive trust and proprietary estoppel ?? ...read more.