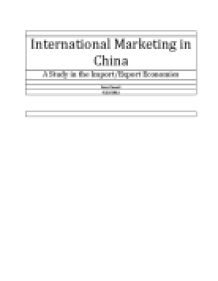 ﻿International Marketing in China A Study in the Import/Export Economies Sean Powell 9/29/2012 ________________ ________________ With 1/5th of the world?s population, China is the most populous country in the world. As of the 2010 Census the population of China (including SAR?s and Taiwan) was 1.37 billion persons (Census Bureau). In November of 2010 the census reported 1.27 billion people ? this makes the annual growth rate .57% as compared to the world population growth rate of over 1.1% during the same period (Census Bureau). This is far removed from the China of the 1990?s where the growth rate over 8 years was 12.4%. Population control has been a concern since the 1950?s and was mandated later in the 1970?s through the One Child policy. The population distribution is heavily in the east of China as represented below where 1 black dot equals 5000 people: (Noll). The density in the east is likely the result of the ease of trading along coastal zones; however, there are larger factors at play. Much of China?s land is comprised of the Gobi Desert as well as the Himalayas. To put this in perspective 90% of the population live in 30% of China?s land area (AAG Center for Global Education ). ...read more.

yuan. Chinese consumers are on the whole unable to purchase international products due to high exchange rates, which lend to the trade deficit for the trading partners. This does however leave China in a fine position as an exporter as it keeps the value of its good artificially low vs. the global market. China?s top 15 trading partners are as follows: All data posted in USD $10,000 (Yearbook). While there are many different trade agreements between the United States and China ? 5 signed last November ? the largest, a Free Trade Agreement (FTA), is still a ways off. An FTA would release all tariffs, quotas, and other barriers to trade ? a strong potential boost to both economies. However, the significant differences between the two economies in the past have led to disputes both socially and politically. For many years we have maintained Most Favored Nation trade status, all the while raising concerns about child labor and working conditions. Before considering coming to a large-scope agreement like a FTA there would need to consensus on human rights. Until such time as an FTA can come into being there will be exchange controls. Though the past decade has seen a liberalization of China?s foreign exchange there are still controls in place. ...read more.

There are now four different categories that run the gambit from private to public: (Leaders). With the large companies there are few that qualify as fully privatized ? usually no more than 30% of the shares are held outside of the government. Joint Ventures make up only a small portion of the enterprises and have historically led to attempts by the China based partner to extricate the foreign presence. The companies that are truly private are generally the direct result of the privatization from government control and the business having been left in the hands of the managers. ?The state has thus forgone ownership in an effort to achieve better results. It does, however, continue to exert influence, notably through party representatives? (Leaders). The remainder of companies are those that have been created by municipally backed funds. This should result in the state being more of a funder and less of an operating partner, though there is little data that is released on the investment of the public funds. ?China?s government has not only held on to economic control but found subtle ways to extend it. At the very least, they constitute an important series of large-scale economic experiments with implications for China?s economy?China has come far since the trials in Shunde and Zhucheng, but the state has always controlled the itinerary?(Leaders). For the foreseeable future any investment in China will need government cooperation. ...read more.