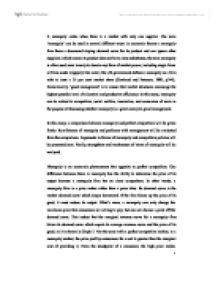 In this essay, a comparison between monopoly and perfect competition will be given firstly. Key features of monopoly and problems with management will be evaluated from the comparison

A monopoly exists when there is a market with only one supplier. The term 'monopoly' can be used in several different ways: in economic theory a monopoly firm faces a downward sloping demand curve for its product and can ignore other suppliers, which means its product does not have close substitutes; the term monopoly is often used more loosely to denote any form of market power, including single firms or firms under oligopoly like cartel; the UK government defines a monopoly as a firm with at least a 25 per cent market share (Gowland and Paterson, 1993, p144). Economically, 'good management' is to ensure that market structures encourage the highest possible level of allocative and productive efficiency. In this sense, monopoly can be related to competition, social welfare, innovation, and economies of scale in the purpose of discussing whether monopoly is a great enemy to good management. In this essay, a comparison between monopoly and perfect competition will be given firstly. Key features of monopoly and problems with management will be evaluated from the comparison. Arguments in favour of monopoly and competition policies will be presented next. ...read more.

A monopoly firm can abuse its market power to restrict its output and forces up prices for the consumer relative to a perfect competitive market. Thus, consumers may be forced to pay more than he would in a competitive market as limited substitutes are available in a monopoly situation. In a competitive market, the invisible hand of the market makes total surplus as large as it can be. By contrast, the relative high monopoly price and low quantity outcome in monopoly market has led to the transfer from consumer surplus to producer surplus and result in a welfare loss. The triangle ABC in Graph 3 is a welfare loss area that exists because the firm is allocatively inefficiency. A monopoly firm is also productively inefficient because it is not producing at the minimum average cost which is the most efficient output level. However, if the firm gives an output at Qc, the price would have to be lowered and much the profit would fall, which means the firm must use more resources to produce the same output as a competitive industry. Productive inefficiency appears in monopoly market mainly due to 'X-inefficiency' because monopolists only look at the outputs that are produced with given inputs (Leibenstein, 1966). ...read more.

Competition policy therefore tries to create and maintain market structures competitive and control natural monopolies. The policy measures the government use in UK are various, including merger control; making uncompetitive practices illegal; regulations on privatised utilities; removing artificial barriers to entry into market (Grant, 2003, p185). For example, following the recommendations of Competition Commission, the government prevented Sainsbury, Tesco or Asda from taking over Safeway Stores and the stores were finally sold to Morrison. A successful competition policy will put pressure on firms to produce in a more efficient way. It could result in lower prices, higher outputs, higher consumer surplus and more innovation than it would be by doing nothing. However, there is a risk that economic efficiency may be reduced by limitation of firm's dominance and may lead to increased costs. Indeed, monopolies may be allocatively and productively inefficiency compared with a competitive market. Monopolies also give great benefits to the community as a whole. * Reference * Gillespie, A. (2007) Foundations of Economics, Oxford, Oxford University. * Gowland, D.H. & Paterson, A. R.(1993) Microeconomic Analysis, New York, Harvester Wheatshesf. * Grant, S.J. (2003) AS Economics, Essex, Pearson. * Mankiw, N.G. (2001) Principles of Economics 2nd Edition, Fort Worth, Harcourt College. ...read more.