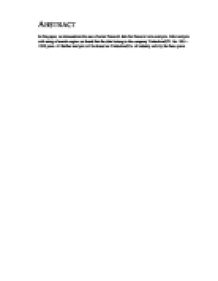 In this paper, we demonstrate the use of actual financial data for financial ratio analysis of Timberland.

ABSTRACT In this paper, we demonstrate the use of actual financial data for financial ratio analysis. After analysis with using of search engine we found that the data belong to the company Timberland CO. for 1994 - 1998 years. All further analysis will be based on Timberland Co. & industry activity for these years. TIMBERLAND CO. SEGMENT ANALYSIS Timberland LLC is a US-based global manufacturer and retailer of outdoors wear with a focus on footwear. Best known for making men's, women's, and kids' footwear, The Company's products fall into two primary groups: (1) footwear and (2) apparel and accessories (including product care and licensed products). Category 1999 1998 1997 Footwear 79.1% 76.9% 75.4% Apparel and Accessories 20.9% 23.1% 24.6% The following table presents the percentage of the Company's total product revenue(excluding royalties from third party distributors and licensees) derived from the Company's sales of footwear and of apparel and accessories for 1997 - 1999 years. FOOTWEAR In 1973, company produced first pair of waterproof leather boots under the Timberland brand. Timberland brand footwear offerings within each of our men's, women's and kids' lines include (i) basic, premium and sports boots, including hikers; (ii) handsewn oxfords, boat shoes and casual footwear; and (iii) performance footwear. The Timberland PRO series for skilled tradespeople and working professionals is an additional footwear category developed to address those consumers' distinct needs. The Timberland PRO series targets working professionals whose jobs demand footwear that stands up to the harshest working conditions. Timberland PRO has an assortment of occupational footwear products across categories including Industrial, Healthcare and Duty, and builds on the marketplace success of its Anti-Fatigue Technology. APPAREL AND ACCESSORIES Timberland(R) ...read more.

A high profit margin signals a strong operating management. COMMON-SIZED BALANCE SHEET FOR TIMBERLAND AND INDUSTRY Despite the importance of cash reserves cash-rich firms are more likely than other firm to attempt acquisition. Equity holders would prefer that cash above the optimal buffer level of reserves be paid out. Freedom from external financing that makes cash reserves valuable to equity holders can be abused by managers. Acquisitions are primary method by which managers can spend cash instead of paying it out to their shareholders. In 2006, the company acquired Howies, the Welsh clothing company. In 2007, Timberland acquired skateboard-footwear company, Ipath, which was sold in 2011. In 2011, Timberland signed a definitive merger agreement with VF Corporation at $43 per share or approximately $2 billion Howies was divested by VF in 2012. NORMALIZED INCOME STATEMENT FOR TIMBERLAND AND INDUSTRY Net income of Timberland company has steadily increased, the main reasons for that is that Cost of sales were decreasing from year to year. At the same time the Gross profit rises from 35% (Y1) to 41.7% (Y5). As it is seen from the picture the selling, administrative and general expenses also were slightly reduced from Y1 to Y5 . Company had to pay less interest expenses that effected Net Income to rise rom 2.8% to 6.9% respectively. List of sources: 1. Company Histories & Profiles: The Timberland Company - http://www.fundinguniverse.com/company-histories/The-Timberland-Company-Company-History.html 2. Annual report pursuant to section 13 or 15(d) of the securities exchange act of 1934 for the fiscal year ended December 31, 1999 of Timberland Co. http://www.getfilings.com/o0000950135-00-001678.html 3. Timberland Report VOL. 1, NO. 4 Copyright � 1999 James W. Sewall Company. http://www.sewall.com/files/timberlandreport/v1n4.pdf 1 Data from: Company Histories & Profiles: The Timberland Company - http://www.fundinguniverse.com/company-histories/The-Timberland-Company-Company-History.html ?? ?? ?? ?? ...read more.