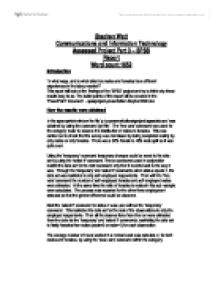 'In what ways, and to what extent do males and females have different experiences in the labour market?'

Stephen Watt Communications and Information Technology Assessed Project Part 3 - SPSS Report Word count 1652 Introduction 'In what ways, and to what extent do males and females have different experiences in the labour market?' This report will look at the findings of the 'SPSS' project and try to think why these results may be so. The bullet points of this report will be covered in the 'PowerPoint' document: - spssproject-presentation-StephenWatt.doc How the results were obtained In the spss syntax window the file 'p:\coursework\citass\project\spssdata.sav' was obtained by using the command 'get file'. The 'freq vars' command was used for the category 'male' to observe the distribution of males to females. This was carried out to check that the survey was not biased by being completed mainly by only males or only females. There was a 52% female to 48% male split so it was quite even. Using the 'temporary' command temporary changes could be made to the data set by using the 'select if' command. These commands used in conjunction restrict the data set for the next command only then it reverts back to the way it was. Through the 'temporary' and 'select if' commands when status equals 1, the data set was restricted to only self-employed respondents. Then with the 'freq vars' command the number of self-employed females and self-employed males were extracted. At the same time the ratio of females to males in this sub-sample were calculated. The process was repeated for the other three employment statuses so that the gender difference could be observed. Next the 'select if' command for status 2 was used without the 'temporary' command. This restricted the data set for the rest of the observations to only the employed respondents. Then all the observations from then on were extracted from the data via the 'temporary' and 'select if' commands; restricting the data set to firstly females then males (male=0 or male=1) ...read more.

Their line manager, man or woman, can prove inflexible in traditional, hierarchical organisations and there is a shortage of part-time working. Oh yes, and money. Apart from those high flying chemical engineers employed in the oil industry who, according to latest figures released by the IChemE's 2002 salary review can pick up pounds 50,000 a year, salaries in other science sectors can be variable to say the least. Joanne Bone is managing director of Phlogiston, an award-winning company which is just 18 months old. Based at Loughborough University, it produces a new detection system used across the chemical, pharmaceutical, water and food industries. Now 33 and a mother, Ms Bone admits she works hard, draws little from her company but is the mistress of her own destiny and hopefully has a future. As of now, she is not tempted to go back into industry as an employee. It has been a long, hard struggle to get to her current position, she says. Ms Bone has an ONC, an HNC, a degree in chemistry, a masters in instrumental and analytical chemistry and she completed her PhD at Loughborough this year. "The salary for my last job in 1997 after my masters plus seven years' experience was pounds 16,000," she recalls. There were also occasions, she admits, when issues arose over men being paid more than their female counterparts. Ms Bone remains passionate about what she does but reckons she won't be putting pressure on her son to follow in mum's footsteps. "For the amount of training and effort that goes into becoming a chemist, it is really underpaid." Gloucester chemist Ithiel Mogridge, winner of the Female Inventor of the Year award, is now 47 and also owns her own company. And like Joanne Bone, she had many years experience working in industry. Ms Mogridge has a degree in food technology and freely admits that she has come across both gender and pay discrimination throughout her career. ...read more.

Wellcome and the research councils commissioned the National Centre for Social Research to carry out a survey of academic staff. A total of 3090 academic staff drawn from 44 institutions took part in the survey, with a 40% response rate. The survey was commissioned after some suggestions that the mainly male academic referees deciding on research awards were biased against women academics. The survey explored whether there were gender differences in research funding applications activities and identified possible reasons behind these differences. It found that 50% of women and 59% of men in the sample had applied for project research grants in the past five years. And when women applied for funding, they were as successful as their male colleagues: 51% of female and 50% of male applicants had obtained half or more of the grants they had applied for. Virtually no gender differences were found in applications for competitively awarded fellowships: 18% of women and 16% of men in the sample had applied for this type of funding. The survey results also show that women were less likely than men to be eligible to apply for grants provided by all research councils and the Wellcome Trust, except for the Economic and Social Research Council. Women are less likely to be eligible for grants because of their over-representation among lower grade academic staff and those with fixed-term contracts, as many of the grant schemes are not open to academic staff in these groups. The main influences on grant application activities included: job seniority, employment status, tenure, type of institution, and professional profile of academics. There was also a wide variation in the institutional support provided to researchers for funding applications. A break from employment for family reasons in the previous ten years also seems to have a considerable negative influence on grant applications. Grant applications were lower than average among women with dependent children - 50% had applied for grants compared with 62% of men with children. ...read more.