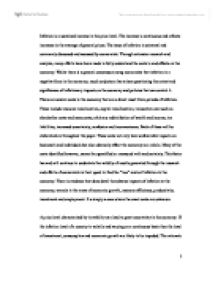 Inflation is a sustained increase in the price level. The increase is continuous and reflects increases in the average of general prices.

Inflation is a sustained increase in the price level. The increase is continuous and reflects increases in the average of general prices. The issue of inflation is universal and commonly discussed and assessed by economists. Through extensive research and analysis, many efforts have been made to fully understand the costs to and effects on the economy. Whilst there is a general consensus among economists that inflation is a negative force in the economy, much conjecture has arisen questioning the extent and significance of inflationary impacts on the economy and policies that can control it. There are several costs to the economy that are a direct result from periods of inflation. These include resource misallocation, capital misallocation, transaction cost such as shoeleather costs and menu costs, arbitrary redistribution of wealth and income, tax liabilities, increased uncertainty, confusion and inconvenience. Each of these will be elaborated on throughout the paper. These costs not only have unfavorable impacts on business's and individuals but also adversely effect the economy as a whole. Many of the costs identified however, cannot be quantified or measured with and certainty. This factor has and will continue to understate the validity of results generated through the research and efforts of economists in their quest to find the "true" costs of inflation to the economy. There is evidence that does detail the adverse impacts of inflation to the economy, namely in the areas of economic growth, resource efficiency, productivity, investment and employment. It s simply a case where the exact costs are unknown. ...read more.

The resulting outcome from this is that individuals expend greater time and money through their involvement in a series of financial transactions. This process involves transferring funds from illiquid accounts into liquid accounts so as to enable them to make payment. This process consumes both time and effort and in some cases will also involve some monetary cost. Menu costs are more of a direct cost to businesses and refer to the costs associated with changing the prices of that particular business's goods. Businesses are conscious of changing their price as it can be a costly procedure and as a result try to make changes as infrequently as possible. The procedure can often involve either entering new prices into the computer system, attaching new price stickers, printing new product catalogues or in the case of restaurants /caf�s', changing the menu. Each of these involves some cost to the business. Periods of inflation lead to greater price volatility and price changes which subsequently lead to business's changing their prices more frequently and thus at a greater cost to them. Periods of inflation will have an effect on the distribution of income and wealth in the economy with a costs represented through the nature of the distribution process, with inflation present characterized by arbitrary distribution. The reasons why and the process at which this occurs is the result of many people having an income structure on fixed terms. The relationship between income and inflation is that in times of high inflation the less the worth of these fixed incomes. ...read more.

The various costs illustrated throughout the paper given an indication of the many costs associated with inflation and the adverse impacts that inflation has on the economy. The rate of growth in the economy is affected through a variety of channels pursuant to the subsequent impacts of inflation. Inflation has several direct negative effects on the allocation of resources and the efficient use of these resources is can be significantly compromised. The productive efficiency of firms is reduced through the forces of inflation on the price system. Investment is also affected through the uncertainty and confusion that inflation imposes on the economy. The level of employment is as noted related to the inflation rate. Policy's aimed at reducing the inflation rate may achieve their desired outcomes in the context of inflation but not without significant harm to the level of unemployment. The tradeoff that exists is a large aspect of inflation analysis and the costs associated though general public perception favors the level of unemployment as a more significant cost indicator to the economy. For this reason, whilst the costs of inflation are evident they are accepted as a less costly outcome than the alternative cost to society of unemployment. The fact that inflation analysis until now has failed in many areas to produce quantitative results that reflect the exact magnitude of the costs to the economy in the areas mentioned, has played a part in the current perception of this tradeoff. In many cases however, given the variables in question and the state or dynamic nature of the economy, it appears an impossible task to establish with any certainty or evidence the 'true' costs associated with inflation. 1 ...read more.