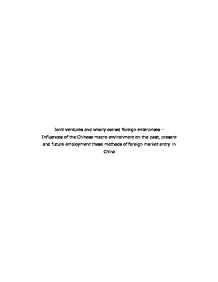 Influences of the Chinese macro environment on the past, present and future employment these methods of foreign market entry in China

Joint ventures and wholly owned foreign enterprises - Influences of the Chinese macro environment on the past, present and future employment these methods of foreign market entry in China 1. Project Summary The attraction of foreign direct investment is one of the cornerstones of China's policy of opening to the international trading community. That is why for the last 25 years the Chinese government has been implementing a number of internal changes which aim to improve the country's environment for foreign investment and thus guarantee a sustained and rapid growth of the national economy. In particular, since China's accession to the World Trade Organisation, the government has honoured many of its commitments to restructure the national investment framework in order to make this more attractive to foreign businesses. The project presented below is an attempt to evaluate those aspects of the macro environment which are perceived to have a most pronounced effect on the Chinese investment setting. In doing so it will concentrate on discussing only the two most popular methods of market entry through foreign direct investment - joint ventures and wholly owned foreign enterprises. The report will also: > Explain why joint ventures were the most popular method of foreign entry in China until recently; > Establish why wholly owned foreign enterprises are at present becoming the preferred method of entering the Chinese market; > Discuss the ways in which the economic, political and legal aspects of the macro environment are likely to develop in the foreseeable future; and > Determine the likely positive and negative impacts these will have on foreign enterprises and their choices of market entry in China. 2. Introduction The author's interest in strategic marketing issues originates from previous work experience, as well as the nature of his responsibilities while in his most recent employment with the Balloch Group in China. The Ballock Group1 was founded in the year 2001 by Howard Balloch, Canada's Ambassador to China from 1996 to 2001. ...read more.

This means that, in spite of its recent efforts, until 2003 the Chinese government has not been able to attract as many high tech projects as it would like. The most likely reason for the latter is sited in a recent OECD report42 which confirms that foreign investors prefer to locate their long-term high-value projects in countries that have predictable economic and policy regimes. Besides, until very recently WOFE43 could not be established in China but with the country's accession to the WTO, this is about to change. In fact under newly approved regulations foreign companies will be allowed to set up majority joint venture trading companies as from 1st June 200444. Also, from 11th December 200445 foreign investors (both companies and individuals) will be able to set up WOFE, to begin with the area of commercial distribution followed then by a number of other sectors to complete the liberalisation until the end of 2007. With these regulatory changes in place, it is expected that many companies will opt for the WOFEs or majority JV (MJV) forms of market entry/participation because such investments provide them with complete control over the business and the direction of its operation. The PWC report sited above46, confirms this and notes that attitudes of foreign investors are changing following the firm commitments made by China towards the liberalisation of its economy. A large number of the company managers interviewed47 stated their intentions for the future being as follows (in the order of preference): > Buy out or reduce the size of participation of their Chinese partners in order to establish a wholly owned or a majority owned venture; > Enter the market directly through wholly owned investment or a new joint venture; > Acquire or merge with other enterprises (Fig. 5) To confirm this trend, another report by Deloitte Touche Tohmatsu (DTT) established that a significant percentage of the companies already in China intended to increase their enterprises and product lines or establish a new enterprise in the future, while a rising percentage of new comers were expecting to enter China through some form of direct investment48. ...read more.

2004 47 These included some currently established in China businesses and some prospective investors 48 See Chart 2: Expansion Vision for the China Market in Deloitte Touche Tohmatsu "Foreign Investment Into China: Fitness Survey", 2004 49 The popularity of the representative office indicated that many companies currently in China prefer to first test the waters before they can embark on more financially committing methods of operation. 50 The China Britain Business Council 51 Ibid. 52 Other challenges identified are: tax/financial, operational, human resource, etc. 53 See Chapter 2 - Operating Challenges in Deloitte Touche Tohmatsu "Foreign Investment Into China: Fitness Survey", 2004, with changes 54 33% of all businesses entering China are concerned about establishing the right relations with the local and national government, according to the Deloitte Touch Tohmatsu report 55 Ibid. 56 http://www.scbc.org 57 Deloitte Touche Tohmatsu report 58 See previous discussions in this report on the size and growth rate of FDI 59 PricewaterhouseCoopers 60 Deloitte Touche Tohmatsu 61 The latter are one of the two sectors which the Chinese government is not prepared to open to private investors. These are envisaged to remain in the full control of the government even after accession. 62 OECD, "China- Progress and Reform Challenges", OECD Investment Policy Reviews 2003 63 This significant changes has also been discussed in the previous sections of this report 64 Deloitte Touche Tohmatsu "Foreign Investment Into China: Fitness Survey", 2004 65 Examples of some of these are: infrastructure, financial market and banking system, established legal system, etc. 66 OECD, "China- Progress and Reform Challenges", OECD Investment Policy Reviews 2003 67 Deloitte Touche Tohmatsu 68 According to Deloitte Touche Tohmatsu 69 Mainly telecommunications. 70 www.bsa.org 71 www.businessweek.com 72 MPA Worldwide Market Research, China Piracy Factsheet, December 2003 73 China Economic Net, "China's Piracy Police Makes Progress", 14th April 2004 74 OECD 75 According to PWC, 75% of all company managers interviewed predicted a sharp increase in investment following the changes in the environment resulting from China's entry into the WTO. ...read more.