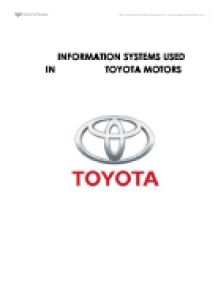 INFORMATION SYSTEMS USED IN TOYOTA MOTORS Introduction Toyota Motor Corporation is a multinational corporation headquartered in Japan, and the world's largest automaker. Toyota employs approximately 316,000 people worldwide. In 1934, while still a department of Toyota Industries, it created its first product Type A engine and in 1936 its first passenger car the Toyota AA. The company was eventually founded by Kiichiro Toyoda in 1937 as a spinoff from his father's company Toyota Industries to create automobiles. Toyota also owns and operates Lexus and Scion brands and has a majority shareholding stake in Daihatsu and Hino Motors, and minority shareholdings in Fuji Heavy Industries, Isuzu Motors, and Yamaha Motors. The company includes 522 subsidiaries. Toyota is headquartered in Toyota City and Nagoya (both in Aichi), and in Tokyo. In addition to manufacturing automobiles, Toyota provides financial services through its division Toyota Financial Services and also builds robots. On May 8, 2009, Toyota reported a record annual net loss of US$4.4 billion, making it the latest automobile maker to be severely affected by the 2007-2009 financial crisis. Toyota headquarters Japan BEA Information System used in Toyota Worldwide Toyota Australia is the Australian subsidiary of Toyota, one of the world's leading car manufacturers. The company realized that integrating the disparate systems throughout the value chain would allow them to achieve considerable process improvements and cost savings while improving customer satisfaction. Toyota Australia deployed BEA WebLogic Integration to underpin the e-Business Transformation Program Importance of Vehicle Components Toyota Japan is one of the world's leading automakers, offering a full range of models, from mini-vehicles to large trucks. Global sales of its Toyota and Lexus brands, combined with those of Daihatsu and Hino. Besides its own 12 plants and 11 manufacturing subsidiaries and affiliates in Japan, Toyota Japan has a massive group of suppliers, supplying Japan components for its domestic made vehicles. However in the case of Toyota Australia, only 79 per cent of components are local content, with the balance relying on imports. ...read more.

These assigned customer details allows a mutual exchange of relevant information for customers for the duration of their purchase as well as extended web based information services for their duration of the ownership of their Toyota vehicle. Basically, the objective of the Lean System, adopted by Toyota is to introduce a pull system with a short lead-time, comprising two main components. They are valued added and non-valued added time, where value added is run time on a machine and latter is the storage time, setup time, idle time, breakdown, inspection time etc. Thus, Australian companies is able to win by being more skilful, flexible in tapping the full creativity as they apply the rules of Lean to all the processes and system. On the beneficial side, IT companies, such as SAP and Oracle is able to present an opportunity to help in rectify this solution further. Moreover, to optimize supply, first establishment agreements with raw material suppliers have to be set. Software such as Vendor Managed Inventory or B2B connections will have in this process to minimize inventory and risk, taking in the consideration for continuous flow matching supply with real demand26. Toyota Australia has been progressing its eBusiness. This is an effort to move the company's main business processes into an extensible online environment. For instance, the Melbourne's manufacturing plant have been using BEA WebLogic Workshop Technology to build Java and Web services-based applications, that will allow manufacturing partners (suppliers) to interoperate with Toyota's. With the aid of the BEA technologies, Toyota's system will allow information to flow smoothly between the integration of it operating system, increasing the functionality of the existing ones. One of the benefits, is the fleet management integration (the Toyota Vehicle Order Processing System) notifying for vehicle deliveries and a dealer interface that allow dealers to receive automatic updates from Toyota's SAP system regarding of vehicle production and delivery. ...read more.

In late 1997, Fujitsu has managed Toyota's mainframe and midrange data centre services, including the operation of a Fujitsu M780/20 mainframe. Toyota moved its legacy applications to a SAP/3 ERP (Enterprise Resource Planning) platform some years ago, and Fujitsu has the service support contract for these SAP operations. Fujitsu manages Toyota's IBM AS/400 midrange machines, and it also supports the car manufacturer's PAMS (Parts Application Management System) application. Fujitsu is now working with Toyota as IT manager to improve not only IT services, but also to assist Toyota to use IT as the enabler to improve its many business services. Information System Security Backup, Recovery and Archiving: Toyota motors has partnered with EMC for Data protection solutions for their IT support, below are the recovery solutions which are implemented by EMC at Toyota IT division. Backup and Recovery Solutions o Avamar Data Store o Backup and Recovery for Oracle o Backup to Disk o Backup with Data Deduplication o Backup, Recovery, and Archive for Tivoli Storage Manager o Bare Metal Recovery o Continuous Data Protection o Data Protection for Microsoft SQL Server o Desktop, Laptop, and Windows Server Backup o Recovery Management o Remote Office Backup Hardware Implemented A majority constitutes of HP desktops and laptops. Also VPN or virtual private network has been implemented through the Cisco VPN access software and the RSA Securid token which change no every 1 minute for better security. Also Oracle 10g has been implemented on the Unix Servers as Database Management Systems or the DBMS. For the automation or robots working in the manufacturing plant IBM mainframe AS400 are being implemented as shown below : - IBM AS400 Mainframe Server Conclusion With the advent of the technology and the development of Information Technology, computer mediated processes have undoubtedly change the traditional supply chain management through the Toyota Australia to conduct their supply chain operations in the automotive industry. The analysis of the supply chain has improved drastically over the period of time, within the implementation of IT. ...read more.