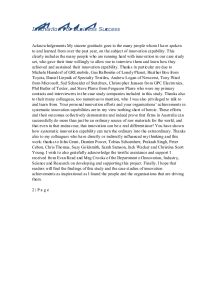 Innovation For Business Success. It is possible to be innovative in both large and small companies in Australia, and to derive significant business success from that innovation.

Innovation For Business Success Acknowledgements My sincere gratitude goes to the many people whom I have spoken to and learned from over the past year, on the subject of innovation capability. This clearly includes the many people who are running hard with innovation in our case study set, who gave their time willingly to allow me to interview them and learn how they achieved and sustained their innovation capability. Thanks in particular are due to Michele Hamdorf of GRLmobile, Gus Balbontin of Lonely Planet, Heather Box from Toyota, Daniel Liepnik of Specialty Textiles, Andrew Logan of Newcrest, Tony Ward from Microsoft, Syd Schneider of Stetchtex, Christopher Janssen from GPC Electronics, Phil Butler of Textor, and Steve Plarre from Ferguson Plarre who were my primary contacts and interviewees in the case study companies included in this study. Thanks also to their many colleagues, too numerous to mention, who I was also privileged to talk to and learn from. Your personal innovation efforts and your organisations' achievements in systematic innovation capabilities are in my view nothing short of heroic. These efforts and their outcomes collectively demonstrate and indeed prove that firms in Australia can successfully do more than just be an ordinary source of raw materials for the world, and that even in that endeavour, that innovation can be a real differentiator! You have shown how systematic innovation capability can turn the ordinary into the extraordinary. Thanks also to my colleagues who have directly or indirectly influenced my thinking and this work: thanks to John Grant, Damien Power, Tobias Schoenherr, Prakash Singh, Peter Cebon, Chris Thomas, Suzy Goldsmith, Sarah Samson, Jack Wacker and Christina Scott Young. I wish to also gratefully acknowledge the terrific assistance and support I received from Evan Read and Meg Crooks of the Department of Innovation, Industry, Science and Research on developing and supporting this project. Finally, I hope that readers will find the findings of this study and the case studies of innovation achievements as inspirational as I found the people and the organisations that are driving them. ...read more.

Examples are take home pies, which became an opportunity during the global financial crisis as people worked longer and ate out less, and "Sex in the City" cupcakes. The company tries to keep ahead by closely observing social trends, such as needs for comfort foods, and by entering award competitions which will allow it a market edge. Two examples of products that it tried and quickly withdrew from the market, after slow sales, were its Beef and Beer flavoured pie, and its Aphrodisiac Cake. Although differentiation through new products is challenging, every few months it launches a new product idea. With some 120 staff comprising full and part timers, equivalent to some 90 full time equivalents, new product development is championed and catalysed by three key individuals. Everyone's best ideas are welcomed and are evaluated. Open innovation is practised and the senior managers travel the world looking for new product and service ideas. From a recent international study tour, Steve Plarre and others brought back and implemented a total of 10 new products. Ferguson Plarre leadership style is seen as important in driving forward on innovation and sustainable development activities and outcomes. The open innovation is fostered through a leadership style characterised as enthusiastic, lead-by-example, 'super-open-door' and family atmosphere. All employees bring ideas forward and successes are celebrated with enthusiasm. The leadership style is: "We shepherd people from behind, let people go with their ideas, through a participative style" (Steve Plarre). Mike Plarre and others have the requisite technical and process knowledge to develop new product cooking and formulation procedures. Ferguson Plarre operates a test kitchen and has a skilled baker who works on these new product ideas. The new product decisions are taken based on an expected ROI and minimum gross profit margins but without formal budgets. However the company has grown to a size where budgets are being developed generally for the first time. ...read more.

(Toyota Australia executive). 107 | P a g e The Toyota approach to innovation is that 80% of what is accomplished is small step improvement of all processes, along with a few 'big things'. The company is very systematic about decisions and systems. Consensus is key to those decisions being implemented effectively. Toyota works hard to leverage influence across the supply chain. Toyota also tries to be proactive in sustainable development. It takes on innovative initiatives in this regard too. It supports and works with Conservation Volunteers Australia. It works closely with the local council. It makes social contributions to local schools. All such partnerships are built on building capability not just a one-off contribution, as the aim is a lasting and positive impact. Toyota measures its contribution and achievements carefully in sustainable development. It publishes an annual sustainability report, and sets targets for improvement. These goals are considered very important, part of its highest level of goals. An example of a recent goal was a 40% reduction in water use throughout the company. Toyota faces many challenges in trying to be competitive and innovative in Australia. It is concerned that manufacturing is reducing in quantity. Mitsubishi has stopped manufacturing and all other producers have reduced their local Australian manufacturing scale and model breadth. Conversely Toyota has expanded its Australian operations and invested in expansion. To make Australia attractive for investment, Toyota must be able to provide a competitive workforce o, in terms of education and skill levels. There must also be a viable supplier base, which means that suppliers must be able to export from Australia. Suppliers must also be innovative as this is seen as a high cost country. Toyota wants its suppliers to: "Take charge of their innovation destiny" (Toyota executive) It is a great time to be innovative as Toyota knows how to make continuous improvement work well, there is marvellous new technology coming available regularly and Toyota is always willing to help and support suppliers. 108 | P a g e 109 | P a g e 9. ...read more.