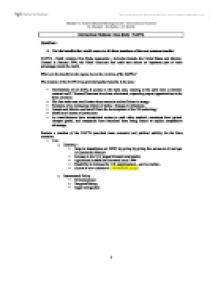 International Business : Case Study : NAFTA Questions : 1. List the benefits that would accrue to all three members of the new common market. NAFTA - North America Free Trade Agreement - incluides Canada, the United States and Mexico. Created in January 1994, the North American free trade area assure an important part of trade advantages round the world. What are the benefits in the region due to the creation of the NAFTA? The creation of the NAFTA has provided global benefits in the area : * Abolishment of all tariffs & quotas in the trade area, creating at the same time a common external tariff / Nontariff barriers have been eliminated, expanding export opportunities in the three countries * The free trade area could make these countries self-sufficient in energy * Existance of an increasing volume of trades : changes in infractures * Canada and Mexico can benefit from the development of the US technology * Mobility of factors of production * As manufacturers have unrestricted access to each other market's consumers have gained cheaper goods, and companies have benefited from being forced to exploit comparative advantage. Become a member of the NAFTA provided more economic and political stability for the three countries. * U.S.: o Economy : * Drop its dependence on OPEC by giving by giving free access to oil and gas in Canada and Mexico * Increase in the U.S. largest bilateral relationship * Agricultural market has increased since 1994 * Possibility to increase the U.S. employement - service market - * Access to new customers : 100 Millions people o International Policy * Environnement * Drug-trafficking * Ilegal immigration Table 1 : U.S. ...read more.

Member States: Austria, Belgium, Denmark, Finland, France, Germany, Greece, Ireland, Italy, Luxembourg, The Netherlands, Portugal, Spain, Sweden, United Kingdom, Cyprus, Czech Republic, Estonia, Hungary, Latvia, Lithuania, Malta, Poland, Slovakia, Slovenia. Out of these countries though only 12 countries are fully integrated and the remaining 13 will integrate in the future. The EU now has a combined population of 455 million a combined territory of 4 million square km and a combined GDP of 9,613bn. ASEAN 2: Association of Southeast Asian Nations also referred to as AFTA (Asian Free Trade Area) was founded on the 8th of August 1967. Today they consist of 10 members (Indonesia, Malaysia, Philippines, Singapore, Thailand, Brunei Darussalam, Vietnam, Laos, Myanmar and Cambodia). The ASEAN region has a population of about 500 million, a total area of 4.5 million square kilometers, a combined gross domestic product of US$737 billion, and a total trade of US$ 720 billion. AFTA covers, in principle, all industrial and agricultural goods. Cooperative peace and shared prosperity are the fundamental objectives of this agreement. Mercosur 3: The Southern Cone Common Market is a common market between four south-american countries - Argentina, Brazil, Paraguay and Uruguay -. Through this market an economic trade is open between those countries. That means that inside the area those countries do not have to pay any tariffs but outside tariffs that they have to pay to other countries can be different from each other. It is really useful for agricultural, energetic and automobiles firms. Mercosur was created by Argentina, Brazil, Paraguay and Uruguay in March 1991. ...read more.

39.0 43.9 43.8 Exports 83,822 99,412 127,195 Share of EU Total (%) 36.4 40.2 43.7 Trade Balance -2,749 -6,959 1,997 Source : Eurostat 2002 What is the actual politic situation? * UE institutions are more developed and better established : o Never has a vision of united North America : No coordination in terms of economy and social policies...important fear : lost their political institutions and their identity o Resolve problems through bilateral deals. Not so often as in the European meetings we do not see the presidents of o Try to avoid actions where they'll have to sacrifice national sovereignty * how many business are moving out of NAFTA * Obstacles to trade and investment between NAFTA and the EU o NAFTA * For Canada and Mexico, the proximity of the US market make them trade dependant * Hemispheric integration o EU * Has focus the last years on Eastern enlargement * Go deeper into the internal social-policy cohesion * What about EU today? : the successful European story 1 NAFTA and EU comparison will be done in question 6 2 http://www.aseansec.org, Free Trade Area Membership As a Stepping Stone to Development : The Case of ASEAN World Bank Discussion Papers ; 421, Fukase, Emiko.; Martin, Will., Washington, D.C. World Bank, 2001 3 www.mercosur.org.uy 4 http://www.ftaa-alca.org 5 www.dfait-maeci.gc.ca, Canadian Department of Foreign Affairs and International Trade, March 2004 6 Blank S., Coiteux M., " The State of North American Integration ", Management International, Vol.8 (1) 2003 7 Eurostat, in " Making globalization work for everyone. The European Union and World Trade", Euorpean Communities, 2003. p.10 8 Eurostat, Brussels, Nov. 2002 9 id. 10 Eurostat, Brussels, Nov. 2002 Master in International Management International Business O. Ciudad - D. Rubio - P. Zierik 1 ...read more.