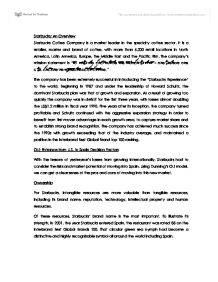 Starbucks; An Overview Starbucks Coffee Company is a market leader in the specialty coffee sector. It is a retailer, roaster and brand of coffee, with more than 6,000 retail locations in North America, Latin America, Europe, the Middle East and the Pacific Rim. The company's mission statement is "to inspire and nurture the human spirit - one person, one cup, and one neighborhood at a time." The company has been extremely successful in introducing the "Starbucks Experience" to the world. Beginning in 1987 and under the leadership of Howard Schultz, the dominant Starbucks plan was that of growth and expansion. As a result of growing too quickly the company was in deficit for the first three years, with losses almost doubling the US$1.2 million in fiscal year 1990. Five years after its inception, the company turned profitable and Schultz continued with the aggressive expansion strategy in order to benefit from first mover advantage in each growth area, to capture market share and to establish strong brand recognition. The company has achieved much success since the 1990s with growth exceeding that of the industry average, and maintained a position in the Interbrand Best Global Brand top 100 ranking. OLI; Entrance from U.S. to Spain Decision Factors With the lessons of yesteryear's losses from growing internationally, Starbucks had to consider the risks and market potential of moving into Spain. Using Dunning's OLI model, we can get a clear sense of the pros and cons of moving into this new market. Ownership For Starbucks, intangible resources are more valuable than tangible resources, including its brand name, reputation, technology, intellectual property and human resources. Of these resources, Starbucks' brand name is the most important. To illustrate its strength, in 2001, the year Starbucks entered Spain, the restaurant was rated 88 on the Interbrand Best Global Brands 100. That circular green sea nymph had become a distinctive and highly recognizable symbol all around the world including Spain. ...read more.

The shops have a chic, comfortable setting which usually consists of couches, interesting newspapers and magazines, relaxing yet upbeat music and an inevitable aroma of rich coffee. It also offers a variety of coffees, specialty teas, frozen coffees, pastries and a slew of merchandise. The Starbucks environment is inviting and appeals to many tastes. The high standards in stores are imperative to uphold; this is what the customer pays for and what the customer expects. Health Consciousness Starbucks does not necessarily need to make changes in its menu to cater to the Spaniards. However, health consciousness is a rising trend in Spain as well as in America. Accordingly, Starbucks offers a fat-free selection and advertises skim-milk, soya milk or the standard partially-skim milk. Some of the pastries are low-fat and there tends to be a range of fruits to select from at most shops though offerings to vary by location. Demographics Research shows the average age of the Spanish population is getting older and birth rates are stagnating. Starbucks' target market is comprised of young and middle-aged people. Although tapping into a broader market would be fortuitous, it's not likely a very viable option. Rather, Starbucks should make sure that the population grows with Starbucks as a constant so that they ensure a "lifer" out of every current consumer. Cervezas Spaniards have a healthy appetite for "cervezas" (beer) as well as for their red wine. This culture of having an alcoholic beverage might pose a threat to consumers who want to socialize with friends. That is, most every bar serves coffee, but Starbucks doesn't serve beer. A Starbucks in Seattle was renovated to allow people to sit at the bar and actually serves regional wine and beer. This might be a viable option for Starbucks in Spain. Furthermore, it is estimated that 63% of coffee is consumed in the morning. Offering beer and wine might be a way to bring consumers in during the later part of the day. ...read more.

Among coffee drinkers, the average consumption in the United States is 3.2 cups of coffee per day. * Women indicated that drinking coffee is a good way to relax. Men indicated that coffee helps them get the job done. Statistics Related to the Tax Rates in Spain Personal tax rates will have an impact on the disposable income of the consumers. Income in Spain is defined as: * Wages and salaries, either as a salaried employee or as a businessperson * Pension benefits * Dividends, yields, interest and capital gains * An employer's pension contributions * In-kind benefits Spain personal Income Tax (IRPF) Personal income tax rates in Spain are progressive to 43%. Income Band (Eur) Tax Rate 0-17,707 24% 17,707 - 33,007 28% 33,007 - 53,407 37% 53,407 + 43% The tax rate for savings income increases is 19% for the first EUR 6,000 and 21% on the excess. With the current unemployment rate and the high tax rates, the consumers might be hesitant in spending on costly coffee. Spain Corporate Tax (Impuesto de Sociedades). This would govern as to how much Starbucks as a company would take home the profits. Standard rate of corporation tax in Spain is 30%. From 1 January 2010, there is a special reduced tax rate (20% on the first EUR 120,202.41 of taxable income) for small companies with fewer than 25 employees and revenue below EUR 5 million which maintain or create jobs. Special tax rates are chargeable on portfolio investment funds (1%), on mutual insurance societies (25%), on co-operatives (except for capital gains) (20%), on non-profit institutions (10%) and on small companies. Spanish resident companies are liable to corporation tax on all sources of income and capital gains, wherever arising. A company is treated as resident in Spain if it is incorporated in Spain has its registered office in Spain or its effective management is in Spain. A non-resident company is taxed on income and gains of a branch carrying on a trade in Spain. ...read more.