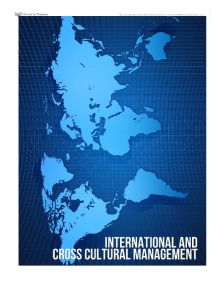 Contents Introduction 3 Styles of Communication 4 High and Low Context Communication 6 Cultural Norms and Scripts 9 Non Verbal Communication 10 Holistic Communication 12 Linear Communication 13 Conclusion 14 References 15 Introduction International and intercultural communication and negotiation provides corporate organizations with several difficulties. Due to different values and cognitive styles, communicating during international collaborations is even more important than during mono-national collaborations. Miscommunication can be caused by misunderstanding different code, because code is dependent on culture-specific communication rules and underlying value/cognitive styles. Different styles may come in a variety of forms, it may be how individuals speak, what non-verbal cues they give or where they position their main point in conversation. In this paper different forms of cross cultural communication are examined, and examples are given as to how confusion could occur within a business environment, real organisations have been used where possible. Styles of Communication Communication is highly important when conducting business across different cultures. As this analysis will show, issues arise when different cultures try and communicate with each other. "Communication is only possible between people who to some extent share a system of meaning" (Trompenaars and Hampden-Turner: 1997: 74). The systems of meaning can create solutions for intercultural communication .as well as presenting new problems. As a result, intercultural communication issues arise. Cross cultural styles of communication are a vital aspect to many businesses that look to expand into new markets or deal with individuals of other nationalities. Culture matters, as the head of strategy for Accenture in Europe stated "Every CEO who has been through a cross-border merger says he knew culture was going to matter but did not realise how much" (Gapper, 2008). ...read more.

The given example shows how Wal-Mart changes its marketing due to different communication methods in cultures; Germany is given an explicit message whereas the United Kingdom (UK) is given implicit information. The result in UK aims to "evoke family life without naming or displaying it"(Brunn: 2006: 156). Wal-Mart also demonstrates a similar strategy in China, giving high-context and implicit messages to the customers; "There were also many small signs in the store (in China) that do not specifically address the store or products" (Brunn: 2006: 161). This is an example of giving high context in China, a country that is classified as having a high context method of communication (Thomas: 2002: 120). Overall, Stanley Brunn demonstrates that Wal-Mart must undertake such adaptions to be successful in foreign markets; "Wal-Mart must overcome both political and cultural obstacles, which requires considerable adaptation and compromise" (Brunn: 2006: 311). It is clear that Wal-Mart is dealing with the issues of intercultural communication with flexibility. This results in the company having better communications with local cultures at the compromise of global standardisation. Standardisation would bring lower costs due to economies of scale, but adaption allows the company to be apart of the local cultures and ultimately due to this, more successful. Cultural Norms and Scripts Cultural norms and scripts are acceptable standards of behaviour that are shared by members of a cultural group. Brislin (1981) states that cultural scripts are the proper mix of socialization and parental discipline that shape individuals attitudes, behaviours and personality. They guide our speech and behaviour and help us interpret others speech and behaviour. Therefore cultural norms and scripts influence the way we speak and act and interpret what others say and do- intercultural misunderstanding can result in potential irritation, conflicts and can cause offence (Zimmerman, 2010). ...read more.

The online system initially core information about which airports you want to fly from, the dates you want to fly around and the number of people traveling. This method of communication is in essence gathering the basic principles; where later the other details such as luggage excess, insurance, seat location, flight choice, inflight meals and so forth, can be clarified systematically, a rather analytical approach; which then allows consumers to decide upon whether to purchase based on price, which is displayed at each stage. Conclusion Cross cultural communication has a significant impact upon the dealings of multinational companies serving different countries. Companies which originate from different countries and cultures should do research into the cultural norms of the organisations they are looking to work with as a necessary must. As seen in the communication methods listed above, there is a lot of room for miscommunication and misunderstanding. Individuals may cause offense by failing to recognise certain cultural norms or by pulling a facial expression that they are not aware of. Our research has led us to recognise that there are larger, more recognisable differences between some cultures compared to others and a certain level of generalisation is applied to theory. Contrast between the brash, exacting style of Western culture, led by the Americans is at complete odds with the reserved, succinct culture of the East, such as the Chinese. The cultural norms and different contexts within both cultures, in some situations, would cause confusion and negate cohesive behaviour in a work environment. It would be an unrealistic expectation to think that cultural differences can be learned to their fullest extent before moving into a country, but so long as recognition is given and efforts are made to address major issues, cooperation in another country will not be affected and business efforts will prosper. ...read more.