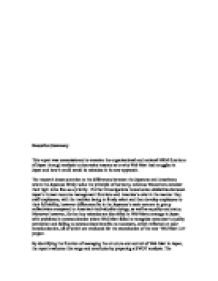 International HRM. The purpose of this report was to analyze Japanese HRM functions and recommend to Wal-Mart suitable ways to approach it with the market.

Executive Summary This report was commissioned to examine the organisational and national HRM functions of Japan through analysis to determine reasons as to why Wal-Mart had struggles in Japan and how it could avoid its mistakes in its new approach. The research draws attention to the differences between the Japanese and Americans where the Japanese firmly value the principle of harmony, whereas Westerners consider their right to be free as a priority. Further investigations reveal some similarities between Japan's human resource management functions and America's exist in the manner they staff employees, with the tradition being to firmly select and then develop employees to their full ability, however differences lie in the Japanese's main concern in group collectivism compared to America's individualist doings, as well as equality and status. Moreover however, further key mistakes are identified in Wal-Marts strategy in Japan with problems in communication where Wal-Mart failed to recognize consumer's quality perception and failing to communicate benefits to customers, which reflected on poor communication, all of which are evaluated for the examination of the new 'Wal Mart 2.0' project. By identifying the function of managing the structure and control of Wal-Mart in Japan, the report evaluates this range and concludes by preparing a SWOT analysis. The analysis reveals that whilst there are some advantages in the Japanese market for Wal-Mart in its brand name and the strong Japanese economy it can partner with, as well as new opportunities in working with Japan's technology, however it also faces challenges with the battle for intellectual property rights violation which is a damning issue in Asian countries. It is recommended that Wal-Mart: * Establish common values through understanding of the Japanese consumer psychology and consumer buying patterns. Through establish common values with consumers, Wal-Mart can recognize customer wants. * Cross-cultural communication and training of its managers and employees to help avoid any conflicts with locals and also better understand the Japanese corporate culture. ...read more.

Developing and Managing global employees and managers As expatriates face several fresh tasks at work as well as their new environment, Wal-Mart's selection of expatriates is largely more complex than the selection employees and managers in home country, or even in a English speaking country. Being a manager in Japan requires a measure of cultural hardiness. Wal-Mart should inspect several personality traits and attributes in evaluating if the candidates character is adequately flexible. Ways to assist comprise of cross cultural training to make the transformation to the Japanese culture and language as simple as possible, where the candidate would improve their knowledge and understanding of the Japanese national and organization culture (Harzing & Ruysseveldt, 2004).. Training is the process of changing employee behavior and attitudes in a way that raises the probability of goal achievement. Wal-Mart's training process is critically crucial in arranging for those who are employed in Japan, because most expatriates are new with the traditions, cultures, and customs of the Japanese. Consequently, this leads to errors in work and problems with locals. For Wal-Mart's criteria, the most straight-forward training, in terms of proper adequate groundwork, is to consign a cultural integrator in Japan. The integrator will be in charge of making sure that Wal-Mart's procedures are in harmony with that of the Japanese national and organisatonal culture. This individual/s counsel, direct, and advocate proceedings required in guaranteeing this harmonisation. The type of training that is necessary of expatriates is influenced by Wal-Mart's overall attitude of international management (Ahmad & Schroeder, 2002).. Cross-Cultural decision making In Japan, the interests of a group are placed over those of an individual. The concept of group focus and cooperativeness in Japanese-style management is manifest. An example is that employees are expected to contribute ideas for improvement of the decision-making processes in management- widespread and slow consultation, diffusion or blurring of responsibility, but prompt execution of agreed decisions. ...read more.