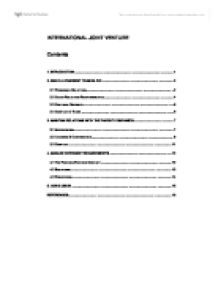 INTERNATIONAL JOINT VENTURE Contents 1. INTRODUCTION 1 2. BUILD A COHERENT TEAM IN JVC 2 2.1 PERSONNEL SELECTION 2 2.2 CLEAR ROLES AND RESPONSIBILITIES 4 2.3 CULTURAL DIVERSITY 5 2.4 CONFLICT IN TEAMS 6 3. MAINTAIN RELATIONS WITH THE PARENT COMPANIES 7 3.1 INTERVENTION 7 3.2 LEARNING & CONTRIBUTION 9 3.3 CONFLICT 11 4. MANAGE DIVERGENT REQUIREMENTS 12 4.1 THE PARTNER-PARTNER CONFLICT 12 4.2 SOLUTIONS 13 4.3 PREVENTION 14 5. CONCLUSION 15 REFERENCES: 16 1. Introduction Today, competition in global business markets becomes fiercer and fiercer. It is harder for companies to survive and grow in this business world. And globalisation is a significant trend of the world's economies. In this situation, joint venture has become an important element of many companies' strategies. There is no universally recognised definition of joint venture. Wikipedia defines joint venture as "a strategic alliance between two or more parties to undertake economic activity together". A similar definition given by Wolf (1999) is "a form of co-operation between two or more parties to achieve an economic objective which is normally the realization of profit". Actually, joint venture can be considered as collaboration. The organisations cooperate with each other and seek the mutual benefits. There are many types of collaboration. Joint Venture Company is a common one. It is an independent business entity formed by two or more separate organisations for a particular purpose (IJV notes 2006). It is an alternative to wholly-owned subsidiaries. Compared with wholly-owned subsidiaries, it has more possible benefits (IJV notes 2006): increasing competitive pressures; sharing costs and risks; developing new products & markets; breaking local constraints on trade, etc. Obviously, IJV is a good way for company's development. In order to get more benefits from it, various significant issues in terms of the long term management should be considered after setting up a JVC. It is not easy to manage a JVC, because it involves two or more organisations in it. ...read more.

The parents attempt to "influence activities or decisions in a way consistent with its own interests and expectations." Indirect control is based on the IJV's need for consultation with the parent firm, similar to shared management (Johnson, J.L., et al 2001). The control bases on the parent's equity position. The fifty-fifty ownership is a common form. These JVCs are usually shared management. When one partner holds a majority shares, the JVC seems to apply dominant management or split management. Bleeke and Ernst (2002) indicate the fifty-fifty equity JVCs are not as successful as the split ownership JVCs in which one partner has majority shares. 50-50 ownership can build trust through the mutual success, but it indeed has many problems. The case about control in the Dowty-Sema JV (Faulkner 1995) shows the problem clearly. Dowty-Sema was a JV set up by the two eponymous companies with 50:50 equity in 1982 to provide command and control systems for the British navy. Dowty provided the hardware and Sema provided the software. The venture company was largely a 'shop window' for tendering, in that the 100-odd staff were all assigned to the payrolls of one parent or the other, dependent on their function. Software engineers were assigned to Sema and hardware engineers to Dowty. Control was exercised in the following way. A project was divided up between the two companies and 90 percent of it was carried out in the parent companies, leaving only 10 percent, principally project management, for the venture company to do. Dowty controlled contract negotiation and administration and Sema controlled finance. Each parent appointed its own project teams, and an element of competition and tension developed between them. The board membership was 50% from each partner. Difficult decisions led to very lengthy meetings by a committee of the board. The venture grew to �50 million sales but unclear control meant that deadlines were missed and the venture made no profit. ...read more.

In this way, JVC may be separated, or acquired by one partner. 4.3 Prevention The disputes and conflicts due to such divergent requirements are common in JVC, but it indeed go against the operation of JVC. In order to prevent these conflicts, and minimise the effects, three dispute-avoiding mechanisms (Matthews 1999) could be considered in JVC. They are structure, culture, and choice of personnel. The partner firms must set up a management structure capable of proceeding with day-to-day operations while respecting the aims and points of view of both partners.We conceived the structure of an IJV as being almost independent of the personalities of the people that comprise it, with strengths and weakness, and a character of its own. The basic two properties of the structure are completeness and logic (Matthews 1999). The culture refers to the roles and responsibilities and the communication mechanisms, which are discussed in section two. One thing should be pointed out is the regular emails, meetings or other form communication will help the on-going negotiation between partners and avoid emergent divergent requirements. The last is the choice of personnel, which is discussed at the beginning of the article. It ensures the right people in the right positions to build an effective team. They may work perfectly to prevent the divergence of partners. 5. Conclusion Through the illustration above, we can get some ideas about the JVC management. Yoshino and Rangan (1995) identify a number of 'critical tasks' for alliance management. Indeed there are many other issues in terms of long term management of JVCs. The main issues discussed here are to only deal with the various relations of JVC. The internal relation is discussed in building a coherent team in JVC. The section of maintaining relations with the parent companies talks about the relation between JVC and parents. And the last is to deal with partner and partner relations involved in JVC. Nowadays, JVC is become more and more popular in the global economy environments. The on-going management of JVC should be further discussed in the future to achieve the success of JVC. ...read more.