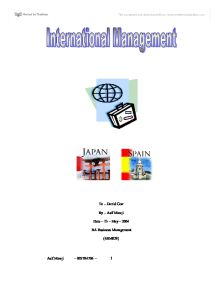 * Spaniards' lack of trust in institutions produces a constant atmosphere of crisis and emergency. * Spaniards like making decisions on their own. Do not impose a decision in direct language. It could be humiliating to your associates. * The organizational chart is social, not functional. The third or fourth level down may be more powerful than those at the top. Dining and Entertainment * It is acceptable and common to be late by 30 minutes in southern Spain and 15 minutes in northern Spain for social meetings. Never be late for a bullfight. * Lunches/dinners are a vital part of business used to establish a relationship, to see if the chemistry is correct and to develop trust. * Attempt to give a toast in Spanish. Be brief when toasting. It is acceptable for women to give toasts. * Tip everyone for everything. * No bread and butter plate is used. Bread is set directly on the table. Restaurants generally charge for bread by the piece. * Spaniards don't waste food. It is better to decline food rather than leave it on your plate. Dress * Appearance is extremely important to Spaniards. They dress elegantly, even for casual occasions. * Dress conservatively. Avoid bright or flashy colours. * Shoes are the most important element of dress. Shabby looking shoes can ruin a very nice outfit. * For business, men should wear jackets and ties, even in warm weather. If the senior person takes his/her jacket off during a meeting, you may do so, too. * Women should wear dresses, blouses and skirts. (www.a-zofetiquette.com) (www.executiveplanet.com/business-culture-in) 8.0 References Adler, N. J. (2001). International Dimensions of Organizational Behavior. Fourth Edition, South-Western College Publishing. Cheney, G. (1999). Values at Work: Employee Participation Meets Market Pressure at Mondragon, Cornell University Press. Corr, D., (2004), Lecture notes. Fukuyama, F. (1995), in Morden, T. (1999), 'Models of national culture- a management review', Cross-Cultural Management, Vol. ...read more.

* At times, Japan's bi-lateral relationships with several nations have been strained for historical and present reasons (Iraq, North Korea and War on Terrorism). However, concerted efforts by each government are assisting in building strong relationships for the new century in the region. ANALYSIS OF SPAIN Spain has a population of approximately 41 million. The capital is Madrid and other cities include Barcelona, Valencia, Sevilla, Zaragoza and Malaga. Spain consists of 17 autonomous communities and Castilian Spanish is the official language. However, six of the 17 regional communities have other official languages and as a result, Spain has five official languages - Castillian Spanish, Catalan, Basque, Galician and Valencian. English is less widely spoken than in other major European countries and it is estimated that as few as one in four Spaniards have a good command of English. Economy Spanish economy has experienced good economic growth and has shown to be one of the best performing economies in the European Union (EU). Growth has occurred as the result of good economic management, lower taxes, employment growth and low interest rates, which have facilitated consumer and business spending. Spain's key sectors in order of importance are services (tourism), agriculture/fishing, industrial (textiles and apparel production, automotive, and chemicals) sectors. Spanish companies are among the largest investors in South America. Trade and Political Spain is keen to become a global player and has recently implemented a strategic plan aimed at encouraging Spanish businesses to focus on the Asian region. It is hoped that this plan will help Spain develop new markets away from Spain's traditional markets of the European Union, USA and South America. Spanish relationships with the US are very strong the moment and they have been linked with various programs like the War on Terrorism in Iraq; this has led to strained relationships with different groups causing Spain to be attacked via bombings. In effect services and tourism went down. Also there are differing fractions in Spain, which are also potentially hostile. However this has not damped their spirits. http://www.austrade.gov.au/australia/layout/0,,0_S2-1_CLNTXID0019-2_3_PWB157761-4_-5_-6_-7_,00.html 1 Asif Mawji - 003794706 - ...read more.