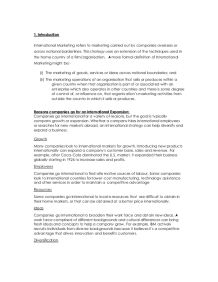 1. Introduction International Marketing refers to marketing carried out by companies overseas or across national borderlines. This strategy uses an extension of the techniques used in the home country of a firm/organisation. A more formal definition of International Marketing might be:- (i) The marketing of goods, services or ideas across national boundaries; and (ii) The marketing operations of an organisation that sells or produces within a given country when that organisation is part of or associated with an enterprise which also operates in other countries and there is some degree of control of, or influence on, that organisation's marketing activities from outside the country in which it sells or produces. Reasons companies go for an international Expansion: Companies go international for a variety of reasons, but the goal is typically company growth or expansion. Whether a company hires international employees or searches for new markets abroad, an international strategy can help diversify and expand a business. Growth Many companies look to international markets for growth. Introducing new products internationally can expand a company's customer base, sales and revenue. For example, after Coca-Cola dominated the U.S. market, it expanded their business globally starting in 1926 to increase sales and profits. Employees Companies go international to find alternative sources of labour. Some companies look to international countries for lower-cost manufacturing, technology assistance and other services in order to maintain a competitive advantage Resources Some companies go international to locate resources that are difficult to obtain in their home markets, or that can be obtained at a better price internationally. Ideas Companies go international to broaden their work force and obtain new ideas. A work force comprised of different backgrounds and cultural differences can bring fresh ideas and concepts to help a company grow. For example, IBM actively recruits individuals from diverse backgrounds because it believes it's a competitive advantage that drives innovation and benefits customers. ...read more.

The duty of the taxpayers to submit tax declarations is specified. A foreign company that operates a branch in Germany must prepare a corporate income tax, local trade tax and turnover tax (VAT) declaration for each calendar year and submit them to the responsible Inland Revenue office. 4.2 Political Factors The federal republic of Germany has 16 states, Berlin being the capital. It's Parliament consists of the Federal Assembly 603 seats; which is elected by popular vote under a system combining direct and proportional representation; a party must win 5% of the national vote or three direct mandates to gain representation; members serve four-year terms) and the Federal Council or Bundesrat elections The President is elected for a five-year term by a Federal Convention including all members of the Federal Assembly and an equal number of delegates elected by the state parliaments; There are 6 Political parties Alliance '90/Greens Christian Democratic Union (CDU) Christian Social Union (CSU) Free Democratic Party (FDP) Party of Democratic Socialism (PDS) Social Democratic Party (SPD) 4.3 Environmental Factors Until recently Germany, Denmark, and the Netherlands were regarded as the most environmentally friendly countries in the EU and were referred to as ' green troika'. These countries were the forces behind the EU environmental policy making. 4.4 Legal There is no minimum wage defined by law. Legal aspects for foreign entrepreneurs: Business enterprises can be founded in Germany in all the legal forms provided for under commercial law. When founding or acquiring a company or business under German law, the same rules and regulations apply to both foreigners and Germans. Germany offers foreign businesses many opportunities for investment. There are no specific investments laws in Germany, foreign investors are treated in exactly the same way as German ones. 4.5 Social Factors Germany never had a cultural metropolis comparable to Paris in France or London in England. Cultural activities are found even in small towns and communities. ...read more.