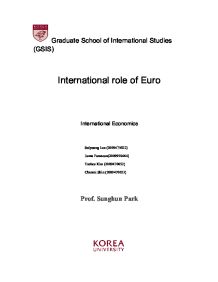 International role of the Euro and the developing Euro crisis.

Graduate School of International Studies (GSIS) International role of Euro International Economics Sulyoung Lee (2009475022) Jonas Fomacon(2009950464) Taehee Kim (2009470052) Chanmi Shin (2009470033) Prof. Sunghun Park Content Introduction 3 History of Euro 4 What are the Benefits of Euro? 4 The Current Economic Situation in Euro Area 5 The International Role of the Euro in International Debt Markets 7 The International Role of the Euro in International Trade 11 The Euro in Third Countries 14 Crisis in Greece 17 Conclusion 20 Bibliography 23 Introduction The Euro has become the second most important international currency and, although strong advantages will continuing to favor the dollar for some time, the euro is likely to further increase its international weight. This brings new opportunities but also new risks for the euro area. Moreover, EMU has created one of the largest integrated economic and financial areas in the world. In combination with the rising international status of the euro, this is making economic developments and policies in the euro area increasingly relevant for the world economy. Globalization, particularly in the financial field, is magnifying the implications of these changes, too. At the outset there was a consensus that the euro would be well received internationally but would not match the US dollar's dominant position. In practice, the euro quickly emerged as the second most important international currency alongside the US dollar and continues to consolidate this position. The euro has become a prominent currency of denomination in international debt markets and its role as an invoicing and reserve currency has been growing as well. It plays an important role as an anchor or reference currency in the managed exchange rate regimes of about 40 countries. Even so, the US dollar remains the first global currency in many areas, in part due to incumbency effects, and the euro's international role remains relatively concentrated in the regions neighboring the euro area. This suggests that there is considerable scope for the euro to continue expanding its role as global currency. ...read more.

In 2008, they were also hit by a decrease in total volume. The Euro's share was higher than in the international loan markets, at close to 30% until 2005. After that, the Euro lost market share until 2007 to the Dollar, which increased from around 53% to about 60% in 2008. In 2008 the Euro also showed a small upward trend, recovering to around 22% (European Central Bank, 2009). The International Role of the Euro in International Trade The primary goal of introducing the euro nearly ten years ago was to achieve a higher level of economic integration within the European single market and to promote both economic growth and stability1. The US dollar still is the dominant currency in international trade transactions, but the euro has gained substantial ground since its intention ten years ago. The role of the euro has expanded its influence as a vehicle currency2 within the process of trade among intra- and inter-national regions. Coupled with the introduction of euro aimed at the greater economic benefits in general, its anticipated effects in terms of trade gains are to intensify the commercial relations between member countries through expanding the volume of trade. By promoting a deeper integration resulted in an elimination of barriers to trade such as reducing the exchange risks and the costs of changing currencies within the European Union,3 many previous literatures continued to find large trade effects from currency union. According to the table given by Faruqee's IMF Working Paper, the trends in Euro area goods and services has been underscored and proved a pattern of positive growth in last ten years. It is definite that euro area countries have continued to determine the choice of currency in which international trade is invoiced as the euro and expand the use of the euro with countries outside the euro area; yet how about the trade involving third countries which are outside the euro area? ...read more.

When the issue of judging the importance of currency in the world economy, particularly in trade, it is prominent that the international role of the euro retains a dedicated regional pattern as well. With close geographical links with the euro zone, the use of euro in the global market becomes most encouraged in countries. Not to mention the euro enhances its influence as a global invoicing currency and the second largest foreign exchange reserves, there is evidence of an increasing role in currency substitution as in the euro banknotes and asset substitution as in total financial deposits and loans. Markedly the current global financial crisis underscores the risks which involves unhedged borrowing or lending by individual economic actors such as households and corporations as a depreciation of domestic exchange rate will result in an serious macroeconomic instability due to incurring higher borring costs. Although it seems the US dollar has dominated and will possibly remain its status as the world greatest official role in the reserve and invoicing currency, criticizing the success or failure of the euro as an international role at this point is impetuosity since the euro has only been around in the global financial market for the last decade. The introduction of euro has surely done a striking achievement working to revive the economy within the euro area, and even with third countries. Yet as the observations of the Greek crisis present, there still is a long way to go until the euro actually displaces the dollar as a world unitary currency in the future unless some particular conditions committed by political sector immediately. It does not necessarily that the process of political absolute integration among the European countries is enforced; rather, a unitary political consideration or commitment among the member states of EU should be considered which reinforce the transparent decision-making procedure that eventually lead to a fair but beneficial competition in fiscial and monetary policies. ...read more.