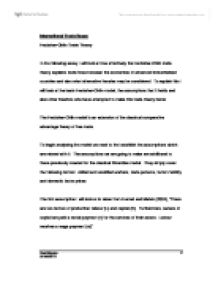 International Trade Essay Hecksher-Ohlin Trade Theory In the following essay I will look at how effectively the Hecksher-Ohlin trade theory explains trade flows between the economies of advanced industrialised countries and also what alternative theories may be considered. To explain this I will look at the basic Hecksher-Ohlin model, the assumptions that it holds and also other theorists who have attempted to make this trade theory better. The Hecksher-Ohlin model is an extension of the classical comparative advantage theory of free trade. To begin analysing the model we need to first establish the assumptions which are related with it. The assumptions we are going to make are additional to those previously created for the classical Ricardian model. They simply cover the following factors: skilled and unskilled workers, trade patterns, factor mobility and domestic factor prices. The first assumption I will look at is taken from Husted and Melvin (2004), "There are two factors of production: labour (L) and capital (K). Furthermore, owners of capital are paid a rental payment (r) for the services of their assets. Labour receives a wage payment (w)". ...read more.

These can be seen below: The Hecksher-Ohlin model can be called the 2x2x2 model, which comes from, 2 factors, 2 products and 2 countries. To construct this model, we need to use the assumptions I have just distinguished. We then need to look at the 2 countries, factors and products. To form the model we can use isocost and isoquant lines. For this model we have made the 2 goods, wine and cloth. Portugal is capital rich and UK is labour rich. This means that Portugal will export wine and import cloth, as wine is their intensive good. The UK will export cloth to Portugal and also import wine from Portugal. The graph assumes that technology is the same in both countries. Portugal has a comparative advantage of wine and the UK has a comparative advantage in cloth production. This is what the graph looks like: This model shows the trade relationship between the UK and Portugal. At the top of the diagram, towards the left, we can see the capital, labour ratios of wine between the UK and Portugal, whereas on the right you can see the capital, labour ratios for cloth. ...read more.

He was still unsure as to why this test did not work. He suggested he needed to question whether or not, the US was more capital abundant than the countries with which it traded, was correct due to the assumption that the US was capital rich. He then found that US labour was 3 times more efficient than abroad. He then made them labour rich by increasing the labour force by three times, giving an increase in the US labour force. Other critics also tried to test the Hecksher-Ohlin theorem. Peter Kennan (1965) thought that the best way to do this was to distinguish between skilled and unskilled labour, meaning the US had skilled labour which has been generated by the US education system and also Research and Development. He also said it would be better to treat skilled labour as a type of capital than a type of labour. This therefore makes the US capital rich again. By putting skilled labour as capital, it removes the Leontief Paradox. To conclude I feel that the Hecksher-Ohlin model does not completely explain trade flows between advanced industrialised industries. I think I have fully covered the Hecksher-Ohlin model and feel it gives an insight to how effectively the model explains trade flows. ...read more.