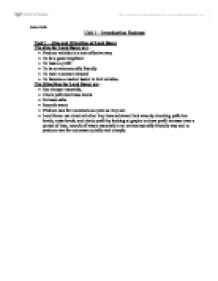 Unit 1 - Investigating Business Task 1 - Aims and Objectives of Land Rover The aims for Land Rover are - * Produce vehicles in a cost effective way * To be a good neighbour * To make a profit * To be environmentally friendly * To meet customer demand * To Become a market leader in 4x4 vehicles. The Objectives for Land Rover are - * Use cheaper materials, * Check pollution/noise levels * Increase sales * Recycle waste * Produce cars for customers as quick as they can * Land Rover can check whether they have achieved their aims by checking pollution levels, noise levels, and check profit by looking at graphs to show profit increase over a period of time, recycle all waste materials in an environmentally friendly way and to produce cars for customers quickly and cheaply. Task 2 - The main Activities of Land Rover Land Rover produces 4 different types of 4x4 vehicles - * Freelander * Defender * Discovery * Range Rover On the Land Rover site there are many other things going on such as - * Steel Press - Making the steel into the shape you need. ...read more.

* The competitors may have more space on their factory site or they may have better ways to reduce pollution and keep noise levels low and they might have better technology and machines to make cars. * Using CAD (computer aided design) the computers help in the design of the vehicles and their components and CAM (computer aided manufacture) the computers contribute to the production process. These processes mean that most of the work done at Land Rover is aided by the computers, some parts have to made by workers and the workers have to supervise the machines. Task 3 - Ownership of Land Rover Brief history of Land Rover * 1946 - Rover moved to Solihull, the site was a shadow factory, government gave it to Rover. * 1947 - Became Rover Car Company, first vehicle made by Wilkes bros. ministry of defence sold the vehicle used to the company. * 1968 - became British Leyland * 1970 - Launch of first range rover * 1975 - Company became Land Rover Limited * 1076 - One million land rovers built by this date * 1987 - Became British Aerospace * 1994 - Sold to ...read more.

so the company does not need to be near its suppliers because the supplies needed for the cars can be transported by road. * Land Rover pays rent to the council to use the site. * The government gave Land Rover a factory to set up the company. The company is situated there because it made aircraft engines during the war. * Most of the workers at Land Rover come from the local area and Warwick University. * Warwick University is closely connected to the site because there is a special training program students can do to work at land rover. Students can take a special degree at Warwick university to have a job at Land Rover. * If the production moved, there would be more space, the wages would be the same and it is near the coast. * If the production moves, people may lose their jobs and some might have to move to nearer the site. * If the production moves, the Solihull plant might be able to concentrate more on the pollution levels, noise levels, and profits, upgrading technology on the other production lines or revamping parts of the factory. ?? ?? ?? ?? Andrew Smith ...read more.