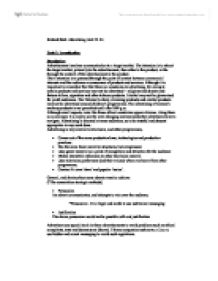 Richard Stott. Advertising Unit 22 A1. Task 1: Investigation Introduction Advertisement involves communication to a target market. The intension is to attract the target market, primarily to the advertisement, then ether to the product, or the through the context of the advertisement to the product. Their intension is to pursued through the point of contact between commercial interests and the audience as consumers of products and services. Although it is important to remember that that there are constrains to advertising, for example certain products and services may not be advertised - religions and doctors and fortune tellers, cigarettes and other tobacco products. Alcohol may not be glamorised for youth audiences. The National Lottery, slimming products and alcohol products may not be advertised around children's programmes. The advertising of women's sanitary products is not permitted until after 9.00 p.m. Although small aspects, rules like these ethical constrains appear obvious. Using them as an example it is easy to see the ever-changing environments that advertisers have to navigate. Advertising is directed at mass audiences, so to be tasteful and descent appropriate in any work done. Advertising is very similar to television, and other programmes; * Comes out of the same production base, technologies and production practices. * Has the same basic narrative structures, but compressed. * Uses genre material as a point of recognition and attraction for the audience * Makes interstitial references to other television material * Uses television performers (and their voices) whom we know from other programmes. * Creates it's own 'stars' and popular 'series'. General, and obvious key areas adverts want to achieve: (*The connotation strategic methods) * Persuasion An advert communicates, and attempts to win over the audience. *Persuasion:- It is illegal and sinful to use subliminal messaging * Justification The above persuasion would not be possible with out justification Advertisers use special tools in there advertisements to avoid problems such as ethical complaints, taste and decency ect (above). ...read more.

1983 - Pepsi Now! 1984 - Pepsi, the Choice of a New Generation 1992 - Gotta Have It 1993 - Be Young, Have Fun, Drink Pepsi 1995 - Nothing else is a Pepsi 1999 - The Joy of Cola Key features of the product: Coca Cola is one of the largest soft drink companies in the world. It's subsidiary products; Sprite, Fanta, Lilt help enforce the image of Coca Cola being one of the most popular, and most recognisable soft drinks ever made. This links on to the fact that Coca Cola was the original cola to invent this type of drink; it boasts its heritage and authenticity as can be seen from some of the jingle copies between Coca Cola & Pepsi. (Above) People in a restaurant or bar would say 'Ill have a coke' not Pepsi, or 'that cola drink'. The key feature of the product in its popularity and recognition, it is 'the most', if not totally famouse, as emphasized if you were to ask people on the street what Coca Cola means. 10/9 people would say its coke! The 'famouse' soft drink. From its humble beginnings back in America over 100 years ago Coca Cola has become one of the only products that is recognised world wide, from many ages to many different cultures. Some religious ceremonies in Mexico use the drink in sub Christian/ Voodoo rituals, where it is believed you should drink the drink and burp to release bad spirits. Even my spell checker recognises C o c a C o l a. Benefits and advantages From a consumers point of view the obviouse benefit in using Coca Cola over i.e. a super markets owen brand, or another rival cola, would simply be the obvouse distinction over the original, prior to a fake, or copy cat version. Other benefits or advantages could arise from Coca Colas the audiences perception of the dramatization of the drink. ...read more.

Crafting: The specialists each deal with their own aspect of the creative work. Hiring: Outside specialists such as commercials director Or photographer are selected Execution: The physical process of producing the work Standards: Checking it's all up to scratch before the release for publication or transmittion. Since 2002, full-service marketing and advertising has been the core of our growth as the Vail Valley's only fully comprehensive marketing agency. Today, our success is built on technological capability and the multi-media integration of our creative campaigns. We have introduced our clients to worldwide interactive communication and they have literally seen the results. We pride ourselves on taking them from today to a successful tomorrow. We believe that ingenuity and creativity play a part in every aspect of our business. As a fully integrated marketing company, we apply a complete array of services to the interaction of every marketing effort. From direct mail to print, broadcast to splash page, the goal is effectiveness for our clients. We credit them for our awards and our staff for campaigns that get results. We believe in strong research and evaluation of all media buys. Demographics, reach, frequency and circulation are only the beginning. Changing trends, public relations parallels and new media all apply to the mix. Cross marketing Web sites, tracking devices and our media relationships have maximized our clients' returns on media purchases. We love doing homework! Strong market planning and research is the core to becoming knowledgeable about any service or product. It is an integral part of strategy development and accomplishing goals and objectives. Hill & Company has even developed its own computer programs and applications, designed to maximize the return on each client's marketing investment. Good strategies make for great creative. Our approach is extremely targeted, impact and integrated into every aspect of the marketing plan. Research in demographics, media and target markets all come into play and cohesive campaigns are the result. Having hand-picked creative staffs that brings experience from around the nation, the talent at Hill & Company runs deep. Their love of creating great work has resulted in numerous awards worldwide. ...read more.