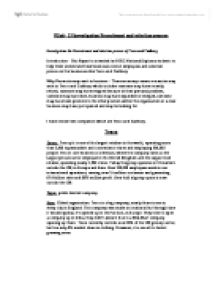 9Unit- 13 Investigation Recruitment and selection process Investigation the Recruitment and selection process of Tesco and Cadbury Introduction - This Report is intended for BTEC National Diploma students to help them understand how businesses recruit employees and selection process in the businesses like Tesco and Cadbury Why Vacancies may exist in business - There are many reasons vacancies may exist in Tesco and Cadbury which includes someone may have recently retired, someone may have resigned because of their personal problem, someone may have died, business may have expanded or merged, someone may have been promote to the other position within the organisation or a new business may have just opened and may be looking for I have chosen two companies which are Tesco and Cadbury. Tesco Tesco - Tesco plc is one of the largest retailers in the world, operating more than 2,300 supermarkets and convenience stores and employing 326,000 people. Tesco's core business is in Britain, where the company ranks as the largest private sector employer in the United Kingdom and the largest food retailer, operating nearly 1,900 stores. Today the group operates in 13 markets outside the UK, in Europe and Asia. Over 100,000 employees work in our international operations, serving over 15 million customers and generating �7.6 billion sales and �370 million profit. Over half of group space is now outside the UK. Type: public limited company. Size: Global organisation. Tesco is a big company; nearly there is one in every city in England. This company was made as a national but through time it became global, it's opened up in the Far East, in Europe. They tried to open a company up in India; they didn't allow it due to a Wal-Mart company opening up there. Tesco currently controls over 30% of the UK grocery sector, but has only 3% market share in clothing. However, it is one of its fastest growing areas. ...read more.

* Induction programme- Tesco will give an induction programme to the new employer which will include information about the company, health and safety, job role etc. Cadbury Cadbury - The company was formed in 1969 by the merger of chocolate company Cadbury and the drinks giant Schweppes. Both companies have a long heritage with Schweppes being founded first in 1783 by Jacob Schweppe when he perfected a process for manufacturing carbonated mineral water in Geneva. Seven years later he set up a factory in London's Drury Lane. Under new owners John Kemp-Welch and William Evill, Schweppes introduce flavoured fizzy drinks such as lemonade in 1834. The company was floated in London 1897 and grew into a large multinational drinks company. Cadbury started out in 1824 when John Cadbury opened a shop in Birmingham selling tea and coffee with cocoa and chocolate as a secondary sideline. Within a few years cocoa and chocolate became the cornerstone of the business. Production was moved from Birmingham to just outside the city where the Bourneville factory and village is established in 1879. The French sounding name, derived from the local river Bourn, was chosen for the factory because French chocolate enjoyed a high reputation at the time. Cadbury manufactured its first milk chocolate in 1897 and in subsequent years introduces products that are still popular today such as Cadbury's Dairy Milk in 1905, Milk Tray in 1915 and Flake in 1920. . Type- It's a Public Limited Company (PLC) Size- It's a world's largest confectionery company. The ways in a Cadbury's recruit an employee by creating the following recruitments documents: Job Analysis This involves a detailed analysis of the Cadbury job in question. This will include a description of the main responsibility of the job by asking. The purpose of a job analysis is to seek and improve the understanding the requirement of a particular job in Cadbury. ...read more.

However the candidate it self will need to be fully prepared before the interview, so they will need to know all the details about the company they are having their interviews. Being prepared before the interview will be an advantage for them because they will have an idea of what they are going to be asked. Feedback of the Interview After the interview the candidate will be contacted as the interview already has their detail in the candidate's CV. At this stage of the recruitment the interviewer will be comparing the entire candidate's interviews. The reason for doing the comparison to see the characteristic of each candidate and see which candidate is the suitable for the job. This is going to help Cadbury of getting the accurate person for the job and prevents them from making any mistakes. A successful candidate will be contacted by either verbally or non-verbally, where they also will be told their specific job roles and what is expected of them. They will receive their personal time table and how many hours they are expected to work in the week and so on. They will be provided with trainings and will be introduce to their other members of staffs working in the department. The candidate will get a mini tour around Cadbury e.g. showing them where the toilet or the fire exists is. During the trainings provided for the candidate they will be shown and told how to do their job roles effectively and efficiently as well as health and safety regulations will be clarified to them,; what they should or shouldn't do in order to avoid any accidents or breaking any laws. This is normally known as Induction day for the new staffs that has been recruited. However unsuccessful candidates will be given feed back from the notes that the interviewer made in duration of the interview. Or they might not even receive any feedback so the candidate themselves will realise that they did not get the job. ...read more.