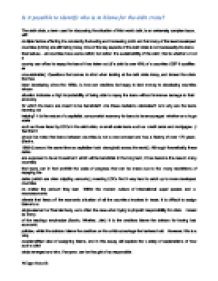 Is it possible to identify who is to blame for the debt crisis?

Is it possible to identify who is to blame for the debt crisis? The debt crisis, a term used for discussing the situation of third world debt, is an extremely complex issue, with multiple factors affecting the constantly fluctuating and increasing problem that many of the least developed countries (LDCs) are still facing today. One of the key aspects of the debt crisis is not necessarily the loans themselves - all countries have some deficit, but rather the sustainability of the debt; that is whether or not a country can afford to repay the loans it has taken out (if a debt is over 40% of a countries GDP it qualifies as unsustainable). Questions that comes to mind when looking at the debt crisis today, and indeed the crisis that has been developing since the 1960s, is how can creditors be happy to lend money to developing countries whose situation indicates a high improbability of being able to repay the loans without immense damage to their economy for which the loans are meant to be beneficial? Are these decisions calculated? And why are the loans harming not helping? It is the nature of a capitalist, consumerist economy for loans to be encouraged whether on a huge scale such as those faced by LDCs in the debt crisis, or small scale loans such as credit cards and mortgages. ...read more.

ever paid back in full" (Eichengreen & Lindert 1992:3). The events in the 1970s set the precedent for the next 20+ years, in which problems were faced largely by a variety of cause and effect situations, meaning blame could be circulated over and over, there is no clear cause. However some countries such as Indonesia and South Korea successfully managed to gain some economic prosperity through loans, raising the question of whether they made wise investments opposed to the so called bad economic policies of some indebted countries, or whether their investments were lucky and caught the economy at the right time, highlighting again the difficulty of assigning blame. Whilst OECD states recovered from the recession reasonably easily, the heavily indebted countries fell further and further behind. In the case of Latin America the financial situation reached such a severe problem that Mexico defaulted on their loan, having a massive knock on effect on the willingness of creditors to lend. Leaving struggling countries with no money to invest, no substantial demand for the export products they relied on so heavily and a disadvantage in the trade market, due to OECD states adopting protectionist policies, driving a wedge between market and shadow prices (Sachs 1989:13) and resulting in LDCs having little or no money for investment and development of welfare as it was being used for consumerism. ...read more.

highlights the impact irresponsible lending has had in what is described as "violation of prudential standards of creditworthiness" i.e. lending money to a source that can quite clearly not pay the money back, at least not without serious sacrifice. For whatever motives, the banks have made serious errors resulting in uncontrollable amounts of debt. However, many miscalculations have been made on the side of the debtors too, including both accepting unrealistic loans and harbouring overambitious goals (though can they be blamed for this?). One of the key issues surrounding this debate is that the loans were not forced by either party, encouraged unwisely perhaps, or accepted too eagerly, but not forced. Therefore blame cannot be assigned, perhaps even, it is just the uncontrollable nature of our economy that is behind the crisis reaching the level it is at today. In cases where "odious debt" exists however it is much easier to pin point the driving force behind unsustainable debt - unconceivable selfishness, corruption and complete disregard for the country they are supposed to be in charge of. Unfortunately whatever is to account for the situation today, it is clear who it is suffering the most from it, and sadly, those who are hit the hardest by the debt crisis are also the ones with the smallest influence on how it will shape out. Sadly it seems that economic capital is more valuable than human life and development. ...read more.