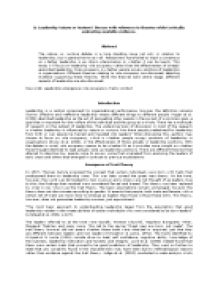 Is Leadership Nature or Nurture? Discuss with reference to theories whilst critically evaluating available evidence.

﻿Is Leadership Nature or Nurture? Discuss with reference to theories whilst critically evaluating available evidence. Abstract The nature vs. nurture debate is a long standing issue not only in relation to leadership, but in general terms as well. Researchers have failed to reach a consensus on whether leadership is an inborn phenomenon or whether it can be learnt. This essay will focus on leadership role occupancy rather than the effectiveness of already appointed leadership. Role occupancy is whether people occupy positions of leadership in organisations. Different theories relating to role occupancy are discussed, detailing evidence supporting these theories. While the theories take centre stage, different aspects of leadership are also discussed. Keywords: Leadership emergence; role occupancy; traits; context Introduction Leadership is a central component to organisational performance, however the definition remains illusive. Effective and ineffective leadership means different things to different people. Hogan et al. (1994) described leadership as the act of persuading other people in the pursuit of a common goal, a goal that is important for the welfare of the individual and the group as a whole. There lies a multitude of research on the subject of leadership. ...read more.

This was found because the students assigned as prison guards acted with cruelty towards those cast as prisoners claiming that they were merely playing the role they were supposed to. Although the above is an extreme case, the underlying principals remain unchanged; the students acted as their roles dictated. This can be applied to leadership in the way that anyone put into a leadership position will assume this role regardless of any individual characteristics. Generalising from this study is difficult as it has come under great criticism, because not all the guards acted similarly, others were fair and did not behave inhumanely. Integrated Approach Both these theories look at leadership as an effect of a single perspective, overlooking the combined effect. A more plausible approach is to look at leadership as an interaction of both nature and nurture. In relation to the study that found personality as a good predictor, Johnson et al. (1998) noted that personality itself is dependent on genetic and environmental factors and so the extent to which each is responsible for leadership is not clear. Zhang et al. (2009) found a noteworthy result on their study on a sample of 89 pairs of identical and 54 pairs of fraternal twins. ...read more.

A rather undermined application in organisations refers to the implicit leadership theory; this is that of follower training. Schyns and Meindl (2005) advocate that revealing to followers the errors of their perceptions of leaders, if any, can allow them to have more realistic expectations and therefore are more capable of selecting a competent leader. Conclusion Although it is clear that leaders possess certain qualities that make them stand out, the evidence suggests that it is not because they were destined for such positions. Instead, authors should look at leadership as a complex structure, dependent on many aspects that are not at the control of the individual. The context of the task, the task itself and the perception of the follower are some of the conditions that may influence leadership role occupancy. Past research has been too simplistic and focused on identifying a single variable, hence the debate of whether leadership is nature or nurture. This essay has shown that a more rewarding avenue to pursue is that of nature and nurture intertwined, although some authors may be so set in their ways that they reject anything alien to their own ideas. ...read more.