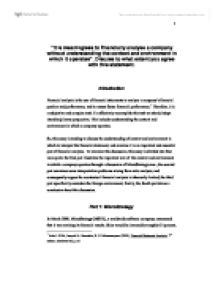 &quot;It is meaningless to financially analyse a company without understanding the context and environment in which it operates&quot;. Discuss to what extent you agree with this statement.

"It is meaningless to financially analyse a company without understanding the context and environment in which it operates". Discuss to what extent you agree with this statement. Introduction Financial analysis is the use of financial statements to analyze a company's financial position and performance, and to assess future financial performance.1 Therefore, it is a subjective and complex task. To effectively accomplish this task we should adopt interdisciplinary perspective. This includes understanding the context and environment in which a company operates. So, this essay is tending to discuss the understanding of context and environment in which to interpret the financial statement, and examine it is an important and essential part of financial analysis. To examine this discussion, this essay is divided into four main parts: the first part illustrates the important role of the context and environment in which a company operates through a discussion of MicroStrategy case ; the second part examines some interpretation problems arising from ratio analysis, and consequently argues the acontextual financial analysis is inherently limited; the third part specifically considers the foreign environment; finally, the fourth part draws a conclusion about this discussion. Part 1: MicroStrategy In March 2000, MicroStrategy (MSTR), a worldwide software company, announced that it was revising its financial results. Sales would be lowered by roughly 25 percent, from $205 million to about $150 million; and profits would be adjusted from 15 cent a share gain to a 43 cent a share loss. ...read more.

The usefulness of ratios depends on our skilful application and interpretation of them, and consequently there are some problems arising from the using of ratio analysis. Firstly, Ratio might be interpreted in isolation, and might not be considered in the context of the company's other ratios. Example (1), company A maintains a current ratio (current assets divided y current liabilities) well below 1.00, which if viewed by itself could signify a solvency problem. However, the company's strong earning power and cash flows provide adequate cash to meet the company's need. Therefore, to more meaningful, a ratio must refer to an economically important relation. Secondly, the analysts could ignore the factors can affect the effectiveness of ratios. It must be recognized that a substantial amount of important information is not included in a company's financial statements. These events involving such things as industry changes, management changes, competitors' actions, technological developments, government actions, and union activities are often critical to a company's successful operation, and so on.6 Without considering these events, the accounting data is unreliable. Consequently, the ratios based on those unreliable data will lack insight. This point is illustrated in MicroStrategy case study in Part 1. So, to successfully predict of corporate performance we must assess the unrecorded events potentially influencing future ratios. Thirdly, the analysts might choose misleading ratios caused by the difficult problem of achieving comparability among firms in a given industry. ...read more.

Mostly, financial information provided by the company is the base of the choice to buy or sell a foreign security for the investors. So, the investors have to challenge of analyzing and interpreting financial statements prepared according to foreign accounting. Since the accounting system in a country is a product of the social, economic, political, and cultural environment, it is difficult to make meaningful comparison across companies in different countries. 11 An interesting research in this area is from the Choi et al. (1983).12 Such as, raising capital through equity issuances in Japan is relatively unusual for a number of reasons, one of which is that the local banks and government play a particular role in providing debt capital. Some research also reported Japanese managers are much less concerned with short term profits than U.S managers, and are likely to make investment that maximize long-term profitability. In general, they found Japanese were much higher rate and lower net income. Therefore, understanding the foreign environment in which a foreign company is based will achieve a successful of financial analysis. Part 4: Conclusion To sum up, this essay has discussed that accounting data itself alone is invaluable. The lessons from MicroStrategy case have proved this point. Then, the essay has discussed how to make accounting figures more meaningful through analyzing ratio analysis, and found contextualized analysis is a better approach to achieve the goal of financial analysis by comparing with the acontextual analysis. We also have considered the international situation for foreign analysts. Finally, without doubt, contextualized analysing manner is necessary in the international situation. ...read more.