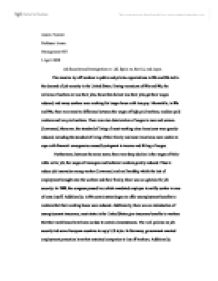 Job security and Immigration.Re:US,Spain vs the EU, Japan

Jessica Tacconi Professor James Management 601 3 April 2008 Job Security and Immigration re: US, Spain vs. the EU, and Japan The massive lay off workers in public and private organizations in 80s and 90s led to the demand of job security in the United States. During recessions of 80s and 90s, the millions of workers to lose their jobs, those that did not lose their jobs got their wages reduced, and many workers were working for longer hours with less pay. Meanwhile, in 80s and 90s, there was massive difference between the wages of high paid workers, medium paid workers and low paid workers. There was also deterioration of wages in men and women. (Lawrence).Moreover, the standard of living of most working class Americans were greatly reduced, including the standard of living of their family and most Americans were unable to cope with financial emergencies caused by stagnant in income and falling of wages. Furthermore, between the same years, there was sharp decline in the wages of Male-white collar job, the wages of managers and technical workers greatly reduced. Thus to reduce job insecurity among worker (Lawrence) and real hardship which the lost of employment brought onto the workers and their family, there was an agitation for job security. In 1988, the congress passed law which mandated employer to notify worker in case of mass layoff. Additionally, in 90s certain states began to offer unemployment benefits to workers that their working hours were reduced. Additionally, there was an introduction of unemployment insurance; most states in the United States give insurance benefits to workers that their work hours have been cut due to certain circumstances. ...read more.

Many foreign cultures have entered into the country. Many languages are being spoken in American streets. More so, immigrants have enriched American with introduction of foreign foods, there are now many foreign restaurants in all the cities of United States. There are also foreign arts and dances have successfully stayed in U.S. Thus, 40 percent of the immigrants that entered into United States in 1990 have already earned American citizenship or permanent residence status. With their new status, they can participate in American politics, many foreign born Americans have now successfully secured political posts in American congress. FORCASTED TREND IN U.S. IMMIGRATION The immigration to U.S. will be increasing. The record shows that U.S. GDP is one of the highest in the world and its economic prosperity, its higher standard of living and the position of its GDP will continue to attract the investors and prospective migrants all over the world. IMMIGRATION IN JAPAN After 1910, Japan was liberated from Korean colonization, there was rapid flow migration between Japan and the Korean peninsula and there was not much of immigration into Japan between 1910 to 1970s.The devastated effect of Second World War made Japan to be isolated from the rest of world from 1945 until 1970. Although there was shortage of labor in the Japanese economy in the 1960s, both the Japanese government and major corporations prefer only to depend on to local labor. The growing status of Japan in the world economy, the rise in the power of Yen and labor shortage led to the influx of immigrants from all over the world into Japan. Thus, in 1990, due to the rapid growth of Japanese GDP, the numbers immigrant workers that entered into Japan grew rapidly from 100,000 in 1990 to 300,000 in 1993 and reached approximately 207,000 in 2005.(Aruduo) ...read more.

The EU and Spanish have now realised that success of their countries business organizations depend on the quality of work force that is running country's private and public organizations. The policies both have adopted to attract the skilled immigrants have helped the Spain and EU to be among the most successful countries in the world. MANAGERIAL RECOMMENDATION In this modern world before any country can develop, it has to recognise the people running the organizations of the country. Meanwhile, in the present globalization, the success of any country is the quality of immigrants in the country. Today one of the reasons that make America to be great today is because of the immigrants in the country. Thus, it is recommended for U.S., Japanese, Spain and EU to apply the reinforcement theory in their immigration process .From the definition reinforcement theory; it is revealed that the process shapes behaviour. Thus, the government should apply Employee Recognition Programs in dealing with immigrants workers in the country. There law dealing with employment should be revised to favor the immigrants that come to work in these countries. The workers that left his country to settle in another country need to be praised and be recognised by the host country. The immigrants that come to work in another country should be given free accommodation for at least a year to adapt to the situation of the country. Another recommendation is that there should be a program to reinforce the skill immigrants in the country by applying the special Skill-Based Pay Plans for the skilled immigrants. The immigrants must pay according to their skills. The citizens who have the same skill with the immigrants that have not yet acquire citizenship should be paid equally and there should be no discrimination to induce other skills immigrants all over the world to immigrate in to the country. ...read more.