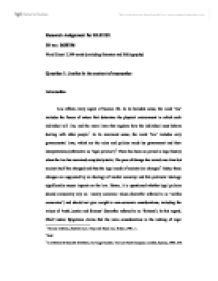 Justice in the context of economics.

Research Assignment for BLB1101 ID no : 3638756 Word Count: 2,249 words (excluding footnotes and Bibliography) Question 1: Justice in the context of economics Introduction Law affects every aspect of human life. In its broadest sense, the word 'law' includes the forces of nature that determine the physical environment in which each individual will live, and the moral laws that regulate how the individual must behave dealing with other people.1 In its narrowest sense, the word 'law' includes only governmental laws, which are the rules and policies made by government and their interpretations (referred to as 'legal policies').2 There has been no period in legal history when the law has remained completely static. The pace of change has varied over time but society itself has changed and thus the legal needs of society also changes.3 Today, these changes are supported by an ideology of market economy and this particular ideology significantly causes impacts on the law. Hence, it is questioned whether legal policies should exclusively rely on merely economic values (hereafter referred to as 'welfare economics') and should not give weight to non-economic considerations, including the values of 'truth, justice and fairness' (hereafter referred to as 'fairness'). ...read more.

These conditions must be sufficient enough to assess policy outcomes including ones that are risky or uncertain and ones that may implicate irreplaceable commodities.15 The use of cost-benefit analysis to measure 'welfare' is certainly appropriate in this regard, but there are also other criterion (methods) used in policy analysis. One good example is the maximization of quality-adjusted life-years (QALYs) which is of course nonmonetized and used in some public policy areas.16 In theory, when compared to cost-benefit analysis, this method is less ambitious.17 This is because QALYs only determine how allocation of fixed budget is done across policies.18 However, cost benefit analysis can determine the number of resources allocated to 'risk-reducing' or 'environment-enhancing' actions.19 As a result, cost-benefit analysis seems the sounder option.20 By virtue of the arguments above, it can be deduced that even if - as Kaplow and Shavell suggest - that cost-benefit analysis is superior to fairness as 'fairness of a decision reflect crude beliefs or intuitions about the costs and benefits at stake',21 it can't be solely accepted as an approach to a decision. The benefits of either approach probably cannot be compared vis-�-vis, but it could also be possible that the enhancement of overall welfare be achieved by making specific decisions on a basis other than welfare. ...read more.

Distinctive from the approach of the welfarists above, those who remain steadfast to believe that the fundamental values of the legal system are 'truth, justice and fairness' reject the apparoach of the welfarists. They argue that the notions of justice and fairness have a legitimate and probably inevitable place in the making of legal policy even if the purpose of the enterprise is to improve welfare. Yet, it does not mean that those who oppose the arguments of the welfarists do consider 'welfare economics' are not relevant to be relied for the purpose of making legal policies. They believe that a mixture of welfare economics and other considerations, including the values of fairnes, rights and justice are the appropriate sources of guidance for the making of legal policies. They explicitly argue that a successful market economy is the product of good government and of the law. In the words of the famous Adam Smith in his book the Wealth of Nations : Commerce and manufactures in short, can seldom flourish in any state in which there is not a certain degree of confidence in the justice of government.30 This mix approach stated above is also adopted by Chief Justice Spigelman. In the context of the Australian legal system, this approach is also adopted by using the term economic rationalism. ...read more.