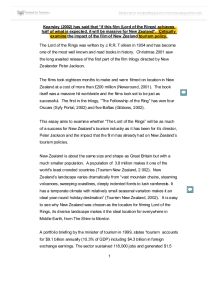 Kearsley (2002) has said that &quot;if this film (Lord of the Rings) achieves half of what is expected, it will be massive for New Zealand - Critically examine the impact of the film of New Zealand tourism policy.

Kearsley (2002) has said that "if this film (Lord of the Rings) achieves half of what is expected, it will be massive for New Zealand". Critically examine the impact of the film of New Zealand tourism policy. The Lord of the Rings was written by J.R.R. Tolkien in 1954 and has become one of the most well known and read books in history. Christmas 2001 saw the long awaited release of the first part of the film trilogy directed by New Zealander Peter Jackson. The films took eighteen months to make and were filmed on location in New Zealand at a cost of more than �200 million (Newsround, 2001). The book itself was a massive hit worldwide and the films look set to be just as successful. The first in the trilogy, "The Fellowship of the Ring" has won four Oscars (Syfy Portal, 2002) and five Baftas (Gibbons, 2002). This essay aims to examine whether "The Lord of the Rings" will be as much of a success for New Zealand's tourism industry as it has been for it's director, Peter Jackson and the impact that the film has already had on New Zealand's tourism policies. New Zealand is about the same size and shape as Great Britain but with a much smaller population. A population of 3.8 million makes it one of the world's least crowded countries (Tourism New Zealand, 2002). ...read more.

The New Zealand government have introduced five acts that are associated with the tourism industry. The New Zealand Tourism Board Act, 1991, "which is administered by the OTSp, establishes the NZTB "...to ensure that New Zealand is so marketed as a visitor destination as to maximise the long-term benefits to New Zealand" and empowers the Minister of Tourism to appoint members of the NZTB Board of Directors". The Tourist and Health Resorts Control Act, 1908, "which is administered by the OTSp, empowers the Minister to manage reserve Land". The New Zealand Maori Arts and Crafts Institute Act, 1963, "which is administered by OTSp, established the Institute which leases the reserve land at Whakarewarewa. The Institute encourages, develops and perpetuates Maori arts, craft and culture and develops tourism operation". The Reserves Act, 1977, "This Act vests the Minister of Tourism with the power to grant leases to reserve land held under the Tourist and Health Resorts Control Act. It also empowers the Minister (and Secretary for Internal Affairs/Director, OTSp) to make and enforce by-laws and carry out management tasks required on these reserves". The Conservation Act, 1987, "Section 6D 1(b) of the Conservation Act provides for members of the New Zealand Conservation Authority to be appointed by the Minister of Conversation after consultation with the Minister of Tourism" (New Zealand Office of Tourism and Sport, 1999). "New Zealand is internationally renowned for its vast expanse of natural assets and beauty. ...read more.

"Specialist tour firm, Bridge the World says its �1,529 'Follow the Fellowship of the Ring' tour, which takes visitors on a 12-night tour of sites used in the film, is selling twice as fast as expected. James Bell, the firm's marketing director, said: 'The film has had a rapid impact. People want to see the land behind the movie.' "(Arlidge, 2002). This is one of the many special "Lord of the Rings" tours that are now available and the demand for them is growing rapidly. It appears that "The Lord of the Rings" is giving New Zealand's tourist industry the boost it has needed. "Tourist chiefs estimate that over the three years the film will boost New Zealand's tourism industry by one third. Geoff Kearsley, an expert in tourism at Otago University, said: 'If this film achieves half of what is expected, it will be massive for New Zealand.'" (Arlidge, 2002). Not only will the film boost tourism numbers in the short term, hopefully people who may have never even thought of visiting New Zealand will now see what a glorious destination it is and those that have been will encourage their friends to visit. From the research undertaken for this essay it can be easily seen that the film has already has a massive impact by boosting tourism numbers to New Zealand and by raising the country's profile, worldwide, as the home of Middle Earth. With another two films still to be released it is almost certain that New Zealand's tourism and film industries will continue to to benefit for some time to come. ...read more.

This answer contains lots of relevant policy detail, and shows the impacts that the Lord of the Rings film is having on tourism in NZ. It is well structured and easy to read. References are relevant and well-used. It could perhaps be criticised for taking a rather uncritical view of the information presented - there is not much critical discussion. Different view points are not examined. At times the answer focuses on visitor numbers rather than impacts on policy.