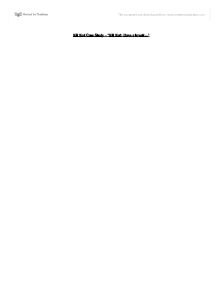 Kit Kat Case Study - 'Kit Kat: Have a break...' Executive Summary: This report is based upon the chocolate confectionary market in particular it is dealing with Kit Kat that is a product of Nestle. Further more the report will include; the situation facing Kit Kat within the chocolate confectionary market, the marketing strategies Kit Kat adopt to obtain maximum customer satisfaction and profitability, the effects European integration will have on the brand and also future recommendations that will help Kit Kat to stay ahead of the competition with threats coming from Cadbury's, a rival chocolate confectionary company, who have just launched a new product called 'Time Out' that is similar in ways, mainly it's wafer thin base, to Kit Kat. The results of these findings were as follows: * Kit Kat markets it's product in two different formats (two finger format and a four finger format) that are promoted and marketed differently. This is to cover more than one market segment, but the consumer does not seem to be able to tell the difference. * The chocolate confectionary market is very competitive so Kit Kat will have to keep inventing new ideas and strategies to stay leader in the market. * Kit Kat's organisational structure is Functionally organised: where functional specialists head different marketing activities and it also has a Product Management Structure: using this approach a manager develops and implements a complete strategy and marketing programme for a specific product or brand. (Kotler pg116) After assessing Kit Kat's strengths, weakness', opportunities and threats recommendations can be made on how to defend the company against Cadbury's introduction of a new product and other elements: * Kit Kat could introduce new brand flavours like the Limited Edition bars: Orange flavour and Mint flavour. ...read more.

(Kotler pg134) Due to the two finger format being number on in the market this gives it an advantage in that it can dictate the price of the market where as the four finger is third in the market so it therefore has to reduce it's price behind the market leader, Mars Bar, if it wants to compete for the number one spot. As Kit Kat has tried to create two different format of it's brand to cover two different market segments the consumer does not see any difference in the total brand which could put the promoting and advertising of the two products in jeopardy due to the fact that the consumer can't tell the difference. Sale figures may fall for the four finger in years to come due to the fact that the population of 15-24 year olds declines (Kotler pg136) but as this could result in a depressing finding for the four finger market the fact that 'the influences of the seniors as a market segment will grow over the next several decades. By the year 2000 people aged 50 or more made up 38 percent of the population and accounted for 75 percent of the country's wealth.' (Mill & Morrison pg361) This could open up a new target market for Kit Kat in that they could advertise and market it's product to seniors due to the increasing number of them and the decreasing number of people aged 15-24 years old. Competition and European integration The chocolate confectionary market is extremely competitive and very stable. With the main competition coming from Cadbury's that has launched a new product called Time Out that is aimed at the CBCL market. ...read more.

Kit Kat should start with releasing the two Limited Edition bars that were previously released and were received very well. It these prove a great success it should conduct test to see what the consumers want as their next flavour. Appendices: SWOT Analysis of Case Study: Strengths * Kit Kat has a good image in the UK * The two finger format is market leader * Kit Kat spends an average of 10% of it's total sales value on advertising which is the largest expenditure in the market * Two Limited Edition Kit Kat's that were brought were a success * Sells it's product in two different formats to cover two different target markets Weakness' * Kit Kat has tried to distinguish between the two formats that it sells but the consumers don't seem to notice * Four-finger format is not the market leader so cannot dictate the price in the market * The number of people from the age of 15-24 years old is decreasing this will have a negative effect on the four finger format as this age group is the one that the four-finger market targets * Has to develop new strategies for integrating into the European market so that ultimate customer satisfaction is achieved Opportunities * Outside the UK more people buy the four-finger format than the two-finger format * Consumers can't tell the difference between the chocolate that is different in other countries * Release the Limited Edition Kit Kat brands that were so well received when they came out * There is a 20% growth in the chocolate confectionary market in the last five years Threats * New product development from competitors like the Time Out bar from Cadbury's * The cost of establishing new brands has increased * Competition coming from small brands and grocery retailers' own labels ...read more.