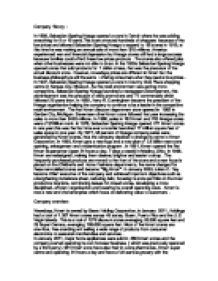 Most of the Kmart stores are one-floor, free-standing unit selling a wide range of products from consumer electronics to seasonal merchandise and services. In January 2011, major home appliances were sold in 268 Kmart stores and the company started operating its own footwear business ( which was previously operated by a third party). 981 Kmart store have also their in-store pharmacies. Kmart super centre are operating 24 hours a day and have a full-service grocery with the merchandise selection of a discount store. Sears Auto Centers are also present in 20 Kmart stores; Sears Auto Centers offer professional automobile repair, maintenance services and full assortment of automotive accessories. 600 Kmart stores have also a new service (powered by MyGofer) which allow customers to buy online through kmart.com website and pick up in store. Kmart Store Facts : Traditional Kmart stores size is 80.000 to 120.00 square feet, they carry a full selection of general merchandise and include a pharmacy. The average Kmart store carries between 60.000 and 80.000 SKU's. Kmart Super Centers have a full-service grocery and a general merchandise stores, most of them are opened 24 hours a day and offer special services. Kmart Super Centers size is from 140.000 to 190.000 square feet, they offer in-house bakeries, USDA fresh meat, fresh seafood ( delivered daily), full delicatessen and variety of speciality food kioks. ...read more.

Online retail spending was expected to increase from $81 billion in 2005 to $95 billion in 2006. Online retail spending would reach $144 billion by 2010 and 71 % of online uses are likely to shop over the internet ( only 65% in 2005). In 2005, internet influenced 27 % of total retail sales, it will influence 50% in 2010. The company has to focus on strong online sales to benefit from growth in online retail spending. The second opportunity for the company is the growth in private label products, indeed, private label products is growing up a lot in the U.S. One of five items sold in U.S supermarkets, drug chains and mass merchandisers is a store brand. Private Label Brands give higher margin than branded products, thus increasing the acceptance of the private labal products can have a favourable impact on the company's margins. Kmart can also take the opportunity of rising the US health care spending. As the population is getting older, people use more drugs, thus the US health care spending is expected to reach 4 trillion by 2015. By 2030, one in every five US citizens will be aged 65 or above ( predictions by the US Census Bureau and the National Institute on Aging ) Kmart's threats are : Stiff competition, Slowdown in consumer spending and increasing rental rates. ...read more.