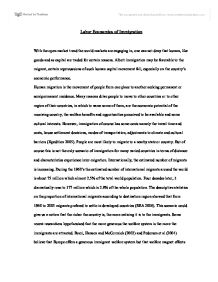 Labor Economics of Immigration. In neoclassical economics migration is considered a disequilibrium that ends once equilibrium is reached again. Lewis (1954) said that the big differentials in wages, employment and returns to capital between countries lead

Labor Economics of Immigration With the open market trend the world markets are engaging in, one can not deny that human, like goods and as capital are traded for certain reasons. Albeit immigration may be favorable to the migrant, certain repercussions of such human capital movement fall, especially on the country's economic performance. Human migration is the movement of people from one place to another seeking permanent or semipermanent residence. Many reasons drive people to move to other countries or to other region of their countries, in which to name some of them, are the economic potential of the receiving country, the welfare benefits and opportunities perceived to be available and some cultural interests. However, immigration of course has some costs namely the travel time and costs, house settlement decisions, modes of transportation, adjustments to climate and cultural barriers (Xpedition 2005). People are most likely to migrate to a nearby state or country. But of course this is not the only scenario of immigration for many varied countries in terms of distance and characteristics experience inter-migration. Internationally, the estimated number of migrants is increasing. During the 1960's the estimated number of international migrants around the world is about 75 million which almost 2.5% of the total world population. ...read more.

Both of the scenarios are respectively illustrated in the Figures 1 and 2 from lecture of Smith (2008). For closed economies, inflow of immigrants can increase the wages of the natives if the skills are complementary because it will compensate the skill shortages (Figure 4). If the skills are substitutable, wages are probably going to decrease (Figure 3). It can be inferred here that effects on the employment of the natives depend on how elastic their current country's labor supply is, combined with the relationship between migrants and natives skills. Immigration Increases total employment (E0 to E1) A shifts in labour demand from (D0 to D1) but reduces native employment (E0 to E2) puts upward pressure on wages (W0 to W1) and increases total employment (E0 to E1) Yet closed economies will not be enough to suit the explanation on how immigration will change natives' wages, if ever it has. Analysis should be brought into an open-economy picture which, as most recent researchers believe, immigration will not have any wage impact in the long-run. Card (2004), Borjas (1995, 2003) and Dustmann (2005) conducted studies on the US and UK as the destination countries. All of these studies concluded that immigration has an insignificant impact on the wages and unemployment of native workers. ...read more.

If we look piece-by-piece at the conclusions of Dustman, we will infer that it is for those with intermediate education who will experience the negative effects. This gives us an impression that immigration studies are advancing but such studies need substantial, if not extensive, amount of data as Dustman complains the UK does not have. In the United States, statistics show that their immigrants are likely to be belonging in the semi and low-skilled type of workers. The United States tried to address immigration by agreeing to the North American Free-Trade Agreement (NAFTA) with Mexico and Canada. This is seen to alleviate the desire to break through the barriers by giving opportunities to the low-skilled or agricultural workers in Mexico, whose are close substitutes to native workers in the USA. Under NAFTA all non-tariff barriers to agricultural trade will be eliminated and many tariffs will be eliminated over periods of 5 to 15 years (USDA c. 2008). This is one of the steps advanced by US to regulate immigration. Undeniably, immigration can be a threat to an economy even if it would only in the short-run. Governments should be focusing on its natives' welfare first before accommodating aliens hence further studies on its own country's capacities and nature of labor should be studied as they will be fair bases of migrant accommodation. ...read more.