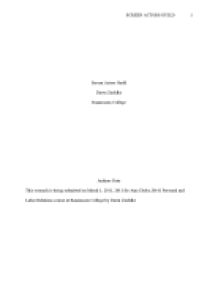 ﻿SCREEN ACTORS GUILD Screen Actors Guild Dawn Zuehlke Rasmussen College Authors Note This research is being submitted on March 1, 2011, 2011 for Amy Dieke, B441 Personal and Labor Relations course at Rasmussen College by Dawn Zuehlke The media industry is an enormous part of the entertainment world. This includes radio, television, film, newspapers, and even American film producers, production companies, and movie studio. When there is such a vast industry there will ultimately be challenges that arise that may involve the use of labor unions. Labor unions are used to allow for equal treatment of employees and to protect their interests. There are many types of labor unions today such as Craft unions, Industrial unions, Public sector unions, Professional Sports unions, and Transportation unions (Carrell, & Heavrin, 2007). The Screen Actors Guild (SAG) is a union that represents movie and television actors and actresses. They were involved in one of the many challenges that are faced in the media industry in the form of a labor dispute against the Alliance of Motion Picture and Television Producers (AMPTP). The AMPTP is a trade organization that represents the interests of producers, studios, and production companies and were involved in a labor dispute with SAG from 2008-2009. The labor dispute began in April of 2008 as SAG anticipated the end of their current contract in June, 2008. The SAG labor dispute began in June of 2008 and continued until June of 2009. The labor dispute involved actors and actresses of prime time television shows over residual income from DVD sales and movies and Television shows that can be found on the internet. These issues were not covered in the old SAG contract that expired in June of 2008. Because of the growth in technology and the use of the internet these areas are a growing source of revenue which actors and actresses want included in their contracts (Whitford, D. ...read more.

The contract wins 78% of the vote. Los Angeles Times,p. B.3. Retrieved January 17, 2011, from Los Angeles Times. (Document ID: 1743171711).Retrieved from ProQuest. Whitford, D. (2007). Drama Inside the Actors' Union. Fortune, 156(9), 31-32. Retrieved from EBSCOhost. White, M., & Fixmer, A. (2008, February 13). Hollywood writers return to work after ending strike. Retrieved January 13, 2011, from http://www.bloomberg.com/?apps/?news?pid=newsarchive&sid=aKdwR9oC54WM **************************************************************************** SMARTHINKING's E-structor Response Form (Your marked-up essay is below this form.) HOW THIS WORKS: Your e-structor has written overview comments about your essay in the form below. Your e-structor has also embedded comments [in bold and in brackets] throughout your essay. Thank you for choosing SMARTHINKING's OWL; best wishes with revising your paper! *Strengths of the essay: Hi, Dawn. Welcome back to Smarthinking! I am Jodi N, and I will be assisting you with this submission. Your paper topic is interesting, and it reflects the knowledge you have about the SAG labor dispute. Your research is well done! *Dawn 2196826 has requested that you respond to the Content Development: Dawn, you explain each section adequately. However, there is a disconnect in the way the content develops. For example, you explain the entire labor dispute between SAG and AMPTP before you tie in the specific material from the textbook. The paper seems to be finished once the SAG dispute has been resolved, and readers do not need to read any further since they already know the outcome. How can you better highlight the SAG dispute throughout the entire paper? In what ways could you interest the reader to find out the labor dispute resolution later? In order to maintain readers? attention, and in order to better connect the textbook material, the labor dispute should be discussed in conjunction with the textbook material. Take, for example, your section on arbitration, mediation and litigation lawyers. There are several paragraphs that seem like a rephrasing of the textbook; it is not clear how these paragraphs connect to the SAG dispute until later on. ...read more.

With the deepening recession and Hollywood still reeling from the affects of the Writers Guild Strike it could have been disastrous for the entertainment industry if a contact had not been voted in. If SAG did not come to an agreement there may have possibly been a strike that would have a shattering affect on California who was already seeing a very high rate of unemployment (Riley-Katz & Medina. 2008). It was very crucial for SAG to send the contract to the actors and actresses for a vote because it could have given the organization and stakeholders a bad image. It may have made them look like they were being very greedy in a time when the United States was in the middle of a recession. A bad image would trickle all the way up to the vice presidents, David Hartley, Mike Hodge, Ned Vaughn and president Ken Howard. It would also affect the National Board of Directors and the Regional Board of Directors all across the country (Screen Actors Guild. 2001). Labor disputes can be a very long drawn out process that is very complicating. Each party to the dispute feels that they are offering the best options for their organization but often times they are in disagreement which can cause tension and conflict. The labor dispute between the Screen Actors Guild (SAG) and the Alliance of Motion Picture and Television Producers (AMPTP) saw many conflicts such as the suspension of phase one by AMPTP when they chose to not bargain with SAG (Salomon, A. 2008), and the threat of a strike by SAG (McFadden, 2008). The process of collective bargaining was instrumental in helping both parties come to an agreement during the labor dispute. Through the bargaining process SAG accomplished their goal of receiving royalties from material that is resold on the internet for actors and actresses. They voted in a new contract in 2009 that gave actors and actresses a 3% raise in income (Verrier R. 2009). ...read more.