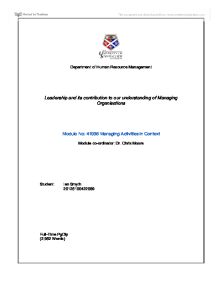 Leadership and its contribution to our understanding of Managing Organisations.

Department of Human Resource Management Leadership and its contribution to our understanding of Managing Organisations Module No: 41936 Managing Activities in Context Module co-ordinator: Dr. Chris Moore Student: Ian Smyth 20125100422089 Full-Time PgDip (2,952 Words) Leadership and its contribution to our understanding of managing organisations Sandra Dawson (1996:216) offers the following definition of what is involved in leadership Leadership exists when someone (the leader) exercises influence over others (the followers) in their group or organisation. Their influence may be wide ranging or narrowly focused but within formal organisations particular emphasis is given to influence over: - Values which are espoused - Directions in which future developments are guided and - The manner in which everyday tasks are accomplished This is something of a summary of the many definitions of leadership and it is indeed hard to define leadership effectively - James MacGregor Burns (1978) in his book Leadership, cites one study with 130 definitions of the term. One can point to examples of good leaders, e.g. Jack Welch, the head of General Electric, or Lou Gerstner as I.B.M. in the 1990's, both of whom turned around the fortunes of their respective companies due to their effective leadership. Effective leadership is therefore important in an organisation, but with so many different definitions as to what makes an effective leader, it surely must be possible to narrow down and focus the varying definitions so that one is able to functionally grasp an approach to leadership that is applicable in an organisational context. Handy (1993:97) points out that like motivation, the search for the definitive solution as to the idea of leadership has proved to be a kind of endless quest for the Holy ...read more.

The situational approach offers us a combination of the trait and the style approaches. Dawson (1996:223) wrote of this approach that This argues for a fit between leaders' characteristics, followers' attitudes and behaviour and situations in terms of task and organisational characteristics including history. Just as the search for one best way to organise was overtaken...by an understanding that organisational arrangements should fit the context, so there were parallel developments in the study of leadership. This sort of approach to leadership was adopted by Fiedler, who poses the question as to what it is about leadership behaviour per se which leads to effective group working. Effectiveness is defined, in a very hard nosed way, as how well the group performs the primary task for which it exists. Focusing on the behaviour of the leader, Fiedler identifies two major leadership styles - Relationship motivated leaders and Task motivated leaders. Relationship motivated leaders get their satisfaction from good relationships with others. Their self esteem depends on how others regard them and they encourage subordinates to participate. Task motivated leaders on the other hand, are strongly concerned to complete successfully any task they have undertaken. They lead by giving clear orders and having standardised procedures for subordinates. They feel most comfortable working from clear guidelines. The implications for Fiedler's research, along with others such as Hershey and Blanchard (1988), shows that different leadership styles can be appropriate in different situations. Fiedler's work in particular shows that the performance of the leader depends as much on situational favourableness as it does on the style of the person in the leadership position. ...read more.

This therefore developed something of a 'cut and thrust', which worked for them, but was different from other successful companies. It is important to recognise, however, that leaders do not always have a total monopoly on the ability to create shared meaning or interests. The leader's position of power may mean that they have an advantage in developing values and systems of behaviour, but others are also able to influence the process by acting as informal leaders or simply by acting as the people they are. Culture ultimately though, like the environment, can be influenced by leaders. In conclusion then, we have seen what a leader is, identified the various ways of looking at leadership and seeing how leadership impacts on a few of the different areas of organisational life. Warren Bennis (1999:76) put forward an interesting point when he said the following What should be clear by now is that post-bureaucratic organisation requires a new kind of alliance between the leaders and the led. Today's organisations are evolving into federations, networks, clusters, cross-functional teams, temporary systems, matrices....-almost anything but pyramids with their obsolete TOPdown leadership. The new leader will encourage healthy dissent and values those followers courageous enough to say no. It will go to the leader who exults in cultural differences and knows that diversity is the best hope for long-term survival and success. While this may be slightly idealistic and may not suit every organisational situation, it does emphasise the point as to leader flexibility and consensus. We can see how the nature of leadership is ever evolving and styles of leadership must and will evolve with global changes. The true leaders of today provide an important, if not crucial, function in organisations and must surely increasingly do so in the future. ...read more.