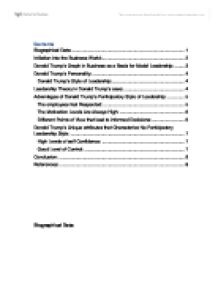 Contents Biographical Data: 1 Initiation into the Business World: 1 Donald Trump's Graph in Business as a Basis for Model Leadership: 2 Donald Trump's Personality: 3 Donald Trump's Style of Leadership: 3 Leadership Theory in Donald Trump's case: 4 Advantages of Donald Trump's Participatory Style of Leadership: 4 The employees feel Respected: 4 The Motivation Levels Are Always High: 5 Different Points of View that lead to informed Decisions: 5 Donald Trump's Unique attributes that Characterize his Participatory Leadership Style: 6 High Levels of self Confidence: 6 Good Level of Control: 7 Conclusion: 7 References: 8 Biographical Data: Donald Trump was born on the 14th of June 1946 to Fred Trump and Mary Anne MacLeod. Fred was of Germany descent while Mary was of Irish descent. Donald exhibited hyperactivity early on in life resulting in his parents' decision to send him to the New York Military Academy (Trump & Zimmerman 1987). He sometimes found it difficult to work with others due to immense believe in what he thought was right. The few friends he maintained are those who were willing to listen to him. A unique trait that he also exhibited early in life is his confidence to stand by his beliefs even if no one backed them. ...read more.

Leadership Theory in Donald Trump's case: The participative leadership theory is quite applicable in the case of Donald Trump. There is however something unique with Donald Trump's participatory style of leadership (Tannenbaum& Schmidt, 1973).He reserves the right to ask for the input of the other members in the team (Schriesheim, 1982).It is very possible for other people to mistaken Donald Trump for a high handed autocratic type of leader who asks his employs to do what he wants. But this is not the case. He consults openly and confidently and always listens to what people who have experience in what he wants to do have to say. He also allows a high degree of independence to the people who manage the numerous projects that he has initiated during his time as one of the top real estate investors in the United States. What are the advantages of the participatory style of leadership that have made Donald Trump such a sensational figure in real estate, not only in the United States, but also in the world? Advantages of Donald Trump's Participatory Style of Leadership: The employees feel Respected: There is nothing as bad as being part of an organization and yet be told what to do at all times without anyone trying to find out what you think about the action being suggested. ...read more.

This saves not only time but also other resources. It also ensures that prime business moments or profitable investments seasons are not lost due to delays. It is important to note that Donald Trump had good levels of control and not high levels of control. The difference is that high levels of control is comparable to micromanagement which can be bad for business in that the leader has to look into each and every small detail that has been done or is supposed to be done. This is a sure recipe for long delays and employee demoralization as they are made to feel that they are not responsible enough to oversee even small affairs. Conclusion: Donald Trump is a confident individual whose participatory leadership style is a sure way of motivating the people who work with and for him. As an extravert, he always wants to extend his influence and the versatility in investment that has taken him to the media world, which is drastically different from his real estate specialization, is evidence of his search for influence. The huge success he has realized in his real estate business is partly due to the style of leadership that he exercises in his business undertakings. ...read more.