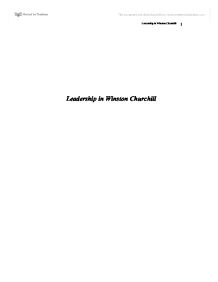 Leadership in Winston Churchill Introduction Winston Churchill is by far one of the most outstanding leaders of the twentieth-century who left his mark in politics and leadership. Churchill had the ability to manage political events in the rapidly changing environment between World War I and post World War II. His leadership style was based on vision, charisma and extraordinary speaking skills. Daft defines leadership as "an influence relationship among leaders and followers who intend real changes and outcomes that reflect their shared purposes" (Daft, 2008). The Free World owes a debt to Winston Churchill for his leadership during a critical time in history that prevailed over Fascism and the desires of Adolph Hitler. Aspiring leaders can learn a lot about Churchill's leadership style and accomplishments throughout his lifetime. Churchill's Characteristics During his lifetime, Churchill was a soldier, writer, politician and statesman whose experiences defined his leadership style. He experienced both success and failure throughout his career which added to his overall character traits. Winston Churchill was optimistic throughout his life which was the key to his can-do spirit. "People rise to the top because they have the ability to see opportunities where others see problems and can instill in other a sense of hope for the future" (Daft, 2008). During his years of military service, Churchill fought in several wars emerging unscathed despite his constant participation in front line operations. His success on the battlefield provided a sense of invincibility which gave him great courage in his later years. Throughout his life Winston Churchill fought against all odds in fulfilling his noble destiny. Some of the challenges he had to overcome during his life were: a speech impediment; laziness in school; a permanent limp due to injury; entrance into the military despite failing the entrance exam twice; defeat in the political arena; and military defeat in the Dardanelles. Despite these challenges, Churchill's perseverance was infectious and propelled him to the noble status he desired. ...read more.

As Winston says, "If you have an important point to make, don't try to be subtle or clever. Use a pile driver. Hit the point once. Then come back and hit it again. Then hit it a third time" (Johnson, 1972). Communication must flow both ways to be effective. Unfortunately, Winston Churchill was never considered a good listener but his pursuit of victory overshadowed this flaw. Leaders must ensure the communication channels are open and learn to actively listen to their employees. Churchill's charisma cut through his communication flaws and added to his phenomenal leadership persona. Aspiring leaders can learn from the former Prime Minister by his charismatic speeches that inspired a nation. Public speaking is only one aspect of communication, the ability to actively listen and write must be mastered to embolden leadership communication. Churchill's Characteristics One of the most essential elements of leadership is decision making. The ability to make the very best decisions consistently is a key to successful leadership. Winston Churchill had the effective decision making skills to lead his nation to victory. "Organizations need both a broad and inspiring vision and an underlying plan for how to achieve it" (Daft, 2008). Churchill's courageous vision enhanced his decisiveness which was critical to his leadership approach. Other factor's that's attributed to the way he led was the calmness he exuded amid commotion and crisis. This imparted confidence among his colleagues and followers and was instrumental in his amazing productivity and concentration. Another important aspect of his leadership was his encouragement to complete discussions of critical issues, and never firing or reprimanding anyone from openly disagreeing with him. Churchill's own self-criticism, independence, and habit of seeking advice led him to change his mind from time to time. Being heard is essential in keeping employees motivated in the workplace and helps solidify a high performance culture. Winston Churchill would have most likely have succeeded during any wartime era. ...read more.

More importantly, having a clear, defined vision is imperative in leading people through times of crisis. Another aspect of Churchill that I've learned is to ask the question "why stand when you can sit" (Johnson, 1972). The lesson learned is to take time for you as a leader to recharge the mental battery to prevent making poor decisions. Leadership effectiveness is measured differently per individual. A large part of leadership is based on personality and personal experiences. Education in leadership provides different aspects and methods in leading people to achieve set tasks or objectives. Learning about Churchill's life, I've broadened my leadership horizons through his experiences, failures and success. I've also gained an appreciation to different viewpoints from people who worked directly with famous leaders. Different opinions of how effective a leader is or was provides a well rounded analysis of the inner workings of that leader. Leadership is an art that requires constant study and application to be effective. Integrating Winston Churchill's broad leadership spectrum provides a case study on how to effectively lead in times of crisis while shedding light on how to overcome large scale failures. Conclusion Winston Churchill will be attributed as being one of the most extraordinary figures of the twentieth century. During the Second World War, as prime minister, he was both defiant to Hitler's ambitions and a beacon of hope for a war torn Europe. Churchill was a famous writer and master of the spoken word. His charisma and optimism should be an example to all aspiring leaders. In studying Churchill, people are presented with a lifetime of trials and tribulations and can learn from his successes and failures through tumultuous times. He was a man of supreme confidence, perseverance, and charisma while believing in the greater good and written word. People who are fighting as an underdog or struggling to survive can learn from Winston Churchill and follow his belief of "never flinch, never weary, never despair" (Johnson, 1972). More importantly, any aspiring leader or effective follower would benefit from studying Churchill's leadership style and lessons learned during one of the darkest periods in history. ...read more.