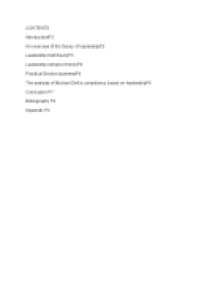 Leadership - literature review, theories and the case of the entrepeneur Michael Dell.

﻿CONTENTS IntroductionP3 An overview of the theory of leadershipP3 Leadership trait theoryP3 Leadership behavior theoryP4 Practical Section businessP4 The analysis of Michael Dell?s competency based on leadershipP6 Conclusion P7 Bibliography P4 Appendix P4 Introduction ?Today?s businesses compete as much on the strength of their intellectual capital as well as their financial capital. This intellectual capital resides in employees at all levels of the firm, but it takes strong leadership to fully develop and enable it? (Ram Charan, Stephen Drotter and Jams Noel, 2001) Nowadays, businesses are facing development problems such as competition, management system, leadership and so on. For entrepreneurs, the ability to lead is an essential leadership quality. It is not only an idea or a reality. Leadership is relating to not only the individual, but also the social. An entrepreneur will not be able to manage his company and staff and accommodate changeful environment market if he does not acquire leadership skills. This means that, even if some good staffs are held, as well as excellent physical conditions, cannot develop and use resources efficiently. Relating this to Dell, Dell is a historic and very good company, where its product is distributed across almost all the continents if not all of them. Behind the successful history of Dell?s growth, is a great man, named Michael Saul Dell, the president of Dell Inc. Michael Saul Dell (born February 23, 1965) is an American business magnate, founder and chief executive officer of Dell Inc. He became the youngest Fortune 500 CEO ever- again, making it hard to preserve that old undergo feeling. (OOPIDOO, 2010) This essay will outline the relevant leadership attributes. In section two, we will embark upon the literature review of an in-depth view on leadership, mainly concentrating on the two main leadership theories which are leadership trait theory and leadership behavior theory (Kent Curtis, 2007). Section three will be the practical evidence on the chosen entrepreneur, Michael Dell. ...read more.

Michael Dell has a good plan for his company which led to Dell?s growth, and he said even if you can?t chart exactly where you are going to be going, it is important to chart your road as much as you can. For example, at the beginning of the development of Dell, he recognized that the retailer will cut a lot of money. Therefore, he does direct marketing later and this was proved by its success. (Steven Holzner, 2006) A leader should have the ability to do the job in his field argued by Ray Henschen (2007). It is useful if the leader can do job well or has done the job before (Larry Hitch, 2007). Employees seldom respect the individual who constantly must rely on others when making decisions, giving guidance or solving problems (Michael Koshuta, 2007). As mentioned before, it is pretty obvious that Michael Dell was a superb techie and he knows his computers inside out (Steven Holzner, 2006). ?At the heart of caring leadership is concern for others? argued by Bruce K (2007). The leader must not look down on others or treat them as machines- replaceable and interchangeable. The leader must be sincerely and deeply concerned about the welfare of people (George Manning, 2007). Michael Dell said that mobilize the people around a common goal. Help them to feel a part of something genuine, special and important, and you will inspire real passion and loyalty. He believes that his company?s continued success lies in teamwork and the opportunity of each of his team members learning, developing and growing. Due to this, people who thrive at Dell are results oriented self- reliant and driven to lead according to Steven Holzner (2006). ?Confidence in one?s ability gives the leader inner strength to overcome difficult tasks? according to George Manning (2007). If leaders lack self-confidence, people may question their authority and may even disobey orders. ...read more.