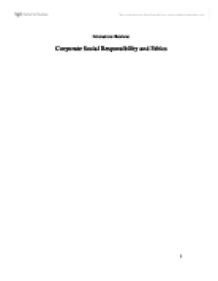 Literature Review Corporate Social Responsibility and Ethics Contents Page Introduction 1.0 Criteria for Selection of Articles 1.1 Defining Corporate Social Responsibility (CSR) and Ethics 1.1.1 Defining Corporate Social Responsibility (CSR) 1.1.2 Ethical Considerations - the HR Perspective 1.1.3 The Ethical and Social Responsibility - the Marketing Perspective 1.1.4 A Brief Overview of the History of SCR 1.1.5 A Brief Conclusion so Far 1.2 Dynamic and Working Models - Measurement of SCR and Social Audit 1.2.1 Working Model and Measurement of SCR 1.2.2 Dynamic Model and Social Audit 1.3 Ethical CSR vs. Altruistic CSR vs. Strategic CSR Conclusion Bibliography Introduction The aim of the following literature review is to identify the most important and knowledgeably important academic and practical works throughout the past decade upon the concept of Corporate Social Responsibility (CSR) and Ethics. The report should gradually flow thought the history of the concept, definitions, academic and practical view of various writers, including the appraisals and criticisms as well as real live examples if applicable. Moreover, draw certain linkages towards the other paradigms. Finally, the conclusions and recommendations should be taking place upon the development and current stance of the concept and its future respectively. The initial literature research has reviled many sources of the information, directly and indirectly focused upon the subject, therefore, the author hope to cover the subject from different perspectives and angles, so that achieving high degree of comprehensively and depth of the analyses. 1.0 Criteria for Selection of Articles Aiming to find the most relevant material as well as achieving the widest possible scope, the following criteria were selected in commencing the literature research: * Academic journals on CSR and ethics as well as related subjects/concepts, for instance Marketing, Advertising, HRM, etc; * Newspapers and magazines - mainly for the live case scenarios and analyses; * Journals/Magazines/Newspapers issues for the past 8-10 years; * Library - books and textbooks. ...read more.

and Philip Kotler (1996, 1999, 2001, 2003) the future holds a wealth of opportunities for companies. Technological advances in solar energy, online networks, cable and satellite television, biotechnology, and telecommunications promise to change the world as we know it. At the same time, forces in the socioeconomic, cultural, and natural environments will impose new limits on marketing, knowledge, management and business practices. Companies that are able to innovate new solutions and values in a socially responsible way are the most likely to succeed. 1.1.4 A Brief Overview of the History of SCR The roots of the concept go back to the 18th century and Scottish philosopher Adam Smith with his well-known work "The Wealth of Nations", where he has provided the world with the framework for modern business and relationship in the society. Smith proposed that capitalism, by encouraging the pursuit of gain and efficiency, works to create greater wealth than any other economic system, and maximises liberty by allowing individuals freedom of choice in employment, purchases, and investments, thereby benefiting the common good. According to Geoffrey P. Lantos (2001), over the past half century, business increasingly has been judged not just by its economic and its moral performance, but also by its social contributions. Henry Ford II, quoted in Chewning et al. (1990), identified this when he spoke at the Harvard Business School as far back as 1969: "The terms of the contract between industry and society are changing ... Now we are being asked to serve a wider range of human values and to accept an obligation to members of the public with whom we have no commercial transactions". The view was further developed by Johnson (1990), arguing that endeavouring to beat one's rivals, and toiling to produce better work to earn the next promotion, if done ethically, will result in high personal development and therefore excellent use of one's time and talents and the firm's treasury (Johnson, 1990). ...read more.

However, this type of CSR is quite rare, despite it appears to be very decent and honourable. Due to the fact that it lies outside of the firm's proper scope of activities, it is probably relatively rare (Smith and Quelch, 1993). Finally and according to Geoffrey P. Lantos (2001), strategic CSR - the fulfilment of a firm' social welfare responsibilities - is, however, admirable since it creates a win-win situation in which both the corporation and one or more stakeholder groups benefit. And in fact, looking back at the overall literature review, this type of CSR is probably most commonly used by all sorts of business players, due to its ability to present them with the win-win outcome. Conclusion Overall, CSR is facing growing expectations from various interested parties but this largely to its usefulness and possible high degree of rewarding to social stakeholders and organisations. The ethical CSR can be considered as an absolute minimum, which has to be delivered by the business organisations to the public and therefore take place in any organisation. On another hand and as it was already mentioned before, one of the most socially responsible things most companies can do is to be profitable In its turn, strategic CSR, 'which financially benefits the business through serving society in extra-economic ways' (Geoffrey P. Lantos, 2001) should be applauded, not condemned as "self-serving". As it was mentioned before, this type of CSR is the most commonly adopted throughout the industry arena. Finally, Altruistic CSR, whose benefit to the company is uncertain and even irrelevant, lies outside the scope of business responsibility. Therefore, even if one (a manager) may feel like adopting it, one should do it at one's own expense in terms of time and funds. As highlighted by Geoffrey P. Lantos (2001), marketers, as the corporation's key need satisfiers and corporate communicators should be in the vanguard of strategic CSR efforts. While difficult issues remain, such as balancing conflicting stakeholder interests and measuring returns to strategic CSR, in view of the public's rising expectations for CSR, marketers should press ahead. ...read more.