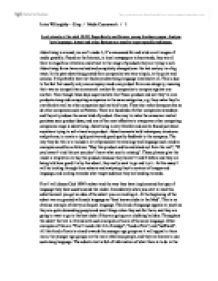 Look closely at the club 18-30, Superfamily and forever young brochure pages. Analyse how language, layout and other features are used to target specific audiences.

Look closely at the club 18-30, Superfamily and forever young brochure pages. Analyse how language, layout and other features are used to target specific audiences. Advertising is around; we can't evade it, It's announced far and wide on all ranges of media possible. Found on the Internet, in local newspapers to bus stands, they are all there to engulf our attention and attract to the range of products they are trying to sell. Advertising forms have evolved and completely changed over the last century in a big ways. In the past advertising posted from companies was very simple, to the point and concise. It'd probably have not had any advertising language involved at all. This is due to the fact that usually only one company made one product from one category, meaning their was no competitive commercial market for companies to compete against one another. Now though these days supermarkets like Tesco produce and sell they're own products along side competing companies in the same categories, e.g. they make they're own food as well as other companies such as bird's eye. They also make shampoos but so do other companies such as Pantene. There are hundreds of other companies nowadays and they all produce the same kind of product. One way to make the consumer market purchase your product ideas, and one of the most effective to overpower other competing companies range is advertising. ...read more.

The main lexis is rolled down the page divided up into five sub headings. Each heading representing an important factor to persuade you to choose this company to fly with, it is to the point and basic e.g. "What you get?", but for the younger age groups this is all they care about when it comes to holidays. The advert also uses other techniques as well. Such as certain text effects to create the effect of the waving motion that the sea creates. This advert is quite basic in terms of extra features. The text features dense information about the place. It covers everything a young person would want to do in a day. It's clearly not focused upon older age groups, as they stereotypically prefer relaxing holidays, and doing activities such as sightseeing and maybe tours of local historic cities and towns. The adverts main technique is to focus on younger people with the type of lexis they use to communicate with the advert read. The superfamily advert is a lot different, it uses completely different language and has clearly got a different target audience. The language is a lot more formal, there is no slang found in the lexis or sub headings. The language found in this advert is a lot more in depth and explains what It has to offer and how you can benefit from it. ...read more.

All these adverts share the same subject for advertisement a holiday to Majorca, but each of these adverts uses different language techniques, they all have different target audiences too. To conclude with I will be comparing the three adverts and how they differ from each other. The 'Club 18-30' adverts starts of with very clear chatty language, this appeals most to younger people as they are less mature and prone to using such slang language. The 'superfamily' advert is a much more formal approach using normal informative language about the range of services they can provide. Finally the forever young advert focuses more on the geographical features of the island to push forward its services. The layout of the adverts also differ, the club 18-30 advert is quite plain but uses sub-headings to structure its text. Superfamily uses small paragraphs and bullet points to clearly separate its factual information into suitable categories for all of the family to be able to read. Forever young has two paragraphs of information about the surroundings of its hotel, with the same idea as Superfamily to list the available resources that can be used at the hotel. By changing and altering the way the text is implemented to the reader we can change the type of target audience, by the type of language used. Companies use this depending on which type of audience they are trying to target . ?? ?? ?? ?? Laine Willoughby - Crisp / Media Coursework / 1 ...read more.