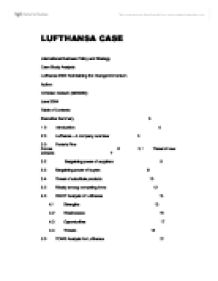 LUFTHANSA CASEFlinders International Business Policy and Strategy Case Study Analysis Lufthansa 2000: Maintaining the Change Momentum Author: Christian Gerlach (9905388) June 2004 Table of Contents Executive Summary 3 1.0 Introduction 4 2.0 Lufthansa - A company overview 5 3.0 Porter's Five Forces 6 3.1 Threat of new entrants 7 3.2 Bargaining power of suppliers 8 3.3 Bargaining power of buyers 9 3.4 Threat of substitute products 10 3.5 Rivalry among competing firms 12 4.0 SWOT Analysis of Lufthansa 13 4.1 Strengths 13 4.2 Weaknesses 16 4.3 Opportunities 17 4.4 Threats 18 5.0 TOWS Analysis for Lufthansa 21 6.0 Business-level strategy of Lufthansa 24 7.0 Corporate-level strategy of Lufthansa 25 8.0 Strategic Alliances 26 9.0 Strategic Leadership and German Culture 39 10.0 Evolutionary Patterns of Strategy and Structure 33 11.0 Conclusion 36 12.0 Appendices 37 13.0 References 39 Executive Summary In 1991 Lufthansa airlines was almost bankrupt. In 1999 the company already announced record results in its 70-year history, helped to found the Star Alliance, the industry's largest network, and is now looking to become one of the leading airlines in the world. An impressive strategic leadership und human resource management played an important role in the transformation and in the process of strategic renewal. The implementation of an integrated cost leadership/differentiation strategy and a related diversification corporate-level strategy also contributed to Lufthansa's success. Having had major involvement in the creation of the Star Alliance also played an important role in Lufthansa's transformation into a successful company that operates in a quite difficult industry environment. Right now, Lufthansa's future looks bright, but they should try to keep the change momentum alive and possibly apply a few new strategies such as enter the low-fare market in Europe, exploit business opportunities in non-airline related market segments, focus on improving in-flight entertainment and customer service, offer Lear jets for lease and improve their hedging against fluctuations in the areas of exchange rates, interest rates and fuel prices. ...read more.

Another opportunity for Lufthansa will be the addition of the Airbus A380 to its fleet in 2007. It will be the largest passenger jet in the world seating 555 passengers. The direct operating costs per seat on the new super jumbo will be 15 to 20 per cent less than those for the Boeing 747-400, previously the biggest aircraft in the Lufthansa fleet. The Airbus A380 also holds room for 40% more passengers. When this new plane will go into service with Lufthansa, it will operate on the very busy routes to North America and Asia. Additional benefits include a lower noise level of the new aircraft and its environmental compatibility. Besides the increasing expenses of higher fuel prices, airlines also need to pay for the noise caused by their planes at a number of airports. With a reduction of noise levels these expenses will decrease. Furthermore, less noisy aircrafts can be used in a more flexible manner, as they are permitted to take off earlier in the day and land later (Lufthansa Annual Report 2003). The Lufthansa group also has the opportunity to engage in other diversified areas. For example Lufthansa's Sky Chef and Lufthansa IT services have the opportunity to conduct business in the areas of catering and maybe IT consulting that are not directly linked to the airline industry. 4.4 Threats Lufthansa faces a range of different threats. A major threat is competition, which includes the mature airlines, and other alliances as well as low fare carriers that have developed over the last couple years, in particular in Europe. The organization also has to deal with cyclical risks. General economic fluctuations as well as geopolitical developments can have a large impact on the performance of the Lufthansa Group. As good examples serve the events of September 11, the Iraq conflict and the outbreak of SARS in Asia along with a stagnating global economy which seriously influenced the business activity of the entire airline industry in a negative way (Heerkens 2003). ...read more.

Consequently Lufthansa continued its transformation process by implementing the strategic cost-management programme '15', which aimed to reduce overall unit cost by 20% within five years (Bruch and Ghoshal 2000). Alliance building -- the STAR ALLIANCE In 1997 Lufthansa was one of the key-founding members of the Star Alliance, the world's best airline network worldwide with the purpose of realizing higher revenues and decreasing costs by exploiting synergy effects as well as offering more customer benefits. The Star alliance has been discussed in great detail in earlier on in this report. 11.0 Conclusion This report showed that Lufthansa went through a great deal of change in strategy and structure in the last decade and after it successfully turned around from near bankruptcy and the crises of September 11, SARS, the war on Iraq the future looks very promising again for Lufthansa. Jürgen Weber's leadership skills played a very important part in turnaround. However, the main challenge Lufthansa is currently facing is how to maintain the awareness of the crisis and the openness for change. It is vital that the learning from the crises is preserved. As the industry analysis and SWOT analysis showed there are substantial threats in the airline industry. Therefore Lufthansa constantly has to develop new strategies to overcome these threats and work on eliminating its weaknesses in order to stay ahead of the competition. 12.0 Appendices Appendix I - Lufthansa Key Figures Business figures 2003 2003 Revenue in million 15,957 Operating result in million 36 Capital expenditure in million 1,155 Cash flow in million 1,581 Stockholders' equity in million 2,653 Total assets in million 16,732 Employees (31.12.2003) 93,246 Performance ratios 2003 2003 Passengers in millions 45.4 Available seat kilometres in billion 124.0 Revenue seat kilometres in billion 90.7 Seat load factor % 73.1 Cargo and mail in millions t 1,580 Available tonne-kilometres in billion 10,814 Revenue tonne-kilometres in billion 7,089 Load factor % 65.6 Appendix II - The hubs of Lufthansa and its partner alliances Appendix III - Airline Alliances in comparison 13. ...read more.