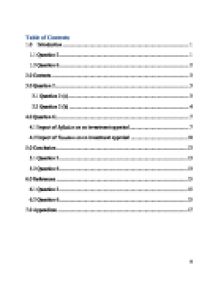 Table of Contents 1.0 Introduction 1 1.1 Question 2 1 1.2 Question 6 2 2.0 Contents 3 3.0 Question 2 3 3.1 Question 2 (a) 3 3.2 Question 2 (b) 5 4.0 Question 6: 7 4.1 Impact of Inflation on an investment appraisal 7 4.2 Impact of Taxation on an investment appraisal 10 5.0 Conclusion 13 5.1 Question 2 13 5.2 Question 6 13 6.0 References 15 6.1 Question 2 15 6.2 Question 6 15 7.0 Appendices 17 1.0 Introduction 2.0 Question 2: "Responsibility Accounting collects and reports planned and actual accounting information about the inputs and outputs of responsibility centers". Responsibility Accounting is based on information pertaining to inputs and outputs. The resources utilized in an organization which are essentially physical in nature and refer to quantities of materials consumed, hours of labor and so on, are termed as inputs. These heterogeneous physical resources are converted into a common denominator called the monetary measure, for the purpose of managerial control. When they are expressed in monetary terms, they are termed as "costs". In a similar way, when outputs are measured in monetary terms, they are termed as "revenues". More precisely, responsibility accounting is based on cost and revenue data or financial information. Responsibility Accounting must be so designed as to suit the existing structure of the organization. Responsibility should be coupled with authority. A person is obliged to perform his duties only when he is conferred with adequate powers to do so. A sound organization structure, with clear-cut assignment of authorities and responsibilities should exist for the successful functioning of the responsibility accounting system. When the organization is not in order, it will miserably fail to work. Responsibility accounting system mainly depends on the assigned responsibilities and authorities such that the performance of each manager is evaluated in terms of such factors. 1.2 Question 6 Financial decision making is important for a company with the purpose to maximizing the company's wealth for the shareholders. ...read more.

An investor should consider both inflation and taxation effects on their capital budgeting decision. Inflation can be defined as the decline in the general purchasing power of the monetary unit. For instance, if the inflation rate is 3% annually, then in theory a RM1 pack of sweets will cost RM1.03 in a year. After inflation, your ringgit cannot buy the same goods it could be forehand. In recent years, most developed countries have tried to maintain an inflation rate of 2-3%. In countries such as Argentina and Brazil, triple-digit annual inflation rates which is, average prices more than doubling each year have been an usual thing and have drastically affected investment decisions. If significant inflation is expected over a project life, it should be specifically and regularly examined in a capital-budgeting model. One significant key to appropriate consideration of inflation in investment appraisal is consistent treatment of the minimum desired rate of return and the predicted cash inflows and outflows. Such consistency can be reached by counting an element in for inflation in both minimum desired rates of return and in the cash flow predictions. There is always a tendency to assume erroneously that, when, both net revenues and the project cost rise proportionately, that inflation would not have much impact. These lines of arguments seem to be convincing, and it is correct for two reasons, which are as follows: first, the rate that is used for discounting cash flows is generally expressed in nominal terms. Many companies base their minimum desired rate of return on market interest rates which also known as nominal rates that comprise the inflation element. For instance, consider three possible components of a 12% nominal rate: (a) Company-risk element- the "risk" premium that is demanded for taking larger risks. 4% (b) Risk-free element- the "pure" rate of interest that is paid on long term federal bonds. 5% (a) + (b) ...read more.

Of the three types of responsibility centers, an investment centre type of responsibility centre which is only an extension of a profit centre can be considered to yield better results. Among the various approaches of performance measurement in investment centre analysis, residual income is evidently superior, though ROI is more popularly used in business circles. 5.2 Question 6 Inflation causes considerable problems in investment appraisal and should be incorporated in both the general and specific financial analysis of a project. It is accepted that inflation can be dealt with either by inflating the cash flows in line with the expected rate of inflation and discounting at the nominal interest rate, or by calculating the cash flows in present day dollars and discounting at the real rate of interest. Both methods will reveal an identical net present value for the same project, but in the internal rate of return will be expressed in nominal terms, while in the latter case it will be expressed in real terms. The inclusion of taxation and finance under inflationary conditions leads to problems with the appraisal .The tax reliefs granted on capital investments via depreciation are generally not received immediately up to the expenditure but are spread over a number of years. This delay not only reduces their present value, as explained earlier, but also expenses them to the effects of inflation. When it is remembered that the effect of inflation is to reduce the purchasing power of a dollar then it can be seen that delaying the receipt of the tax reliefs will not only reduce their present value, but will also lead to a reduction in the bundle of goods that can be bought with the tax relief received in any given year. The further into the future the relief is received, the smaller the bundle of goods that may be bought with the relief in that year because of the increase in the nominal or money price of the goods due to inflation. Thus inflation directly reduces the present value of the tax reliefs on capital investment. 6. ...read more.