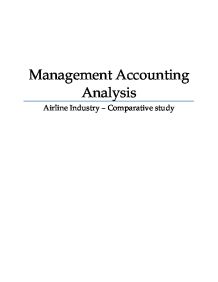 Management Accounting Analysis Airline Industry - Comparative study CONTENTS Aviation Industry in India 3 Investment Policy 4 Government initiative 4 The Road Ahead 5 Jetairways and SpiceJet Annual Report 6 Jet Airways 6 Spice Jet 7 Annual Report Jet airways V/s Spice Jet 7 Management Analysis 10 Comments on Management Analysis of both Airlines 13 Cash Flow Analysis-Indirect Method 14 Reference 16 Aviation Industry in India The Indian aviation industry is one of the fastest growing aviation industries in the world with private airlines accounting for more than 75 per cent of the sector of the domestic aviation market (as of 2006). The industry is growing at a compound annual growth rate (CAGR) of 18 per cent. The country has 454 airports and airstrips, of which 16 are designated as international airports. Mr Praful Patel, Union Civil Aviation Minister has stated that the Indian aviation sector will become one of the top five civil aviation markets in the world over the next five years. Currently, India ranks ninth in the global civil aviation market. Passengers carried by domestic airlines from January-June 2010 stood at 25.71 million as against 21.1 million in the corresponding period of 2009-a growth of 22 per cent-according to data released by the Directorate General of Civil Aviation (DGCA). In terms of market share, private carrier Jet Airways was the market leader with 26.5 per cent share, followed by Kingfisher Airlines with 21 per cent, Air India with 16.9 per cent, Indigo with 16.4 per cent, SpiceJet with 13.3 per cent and GoAir with 5.8 per cent during the month of June 2010. Leading aircraft manufacturers Airbus and Boeing have expressed optimism over the growth of the civil aviation industry in India. As per Airbus, the country would need 1,032 new aircrafts worth around US$ 138 billion by 2028. On a similar note, Boeing has also predicted that the sector would require 1,150 commercial jets worth US$ 135 billion in the next 20 years. ...read more.

14.00 million in 2008-09 to Rs. 22.49 Million in 2009-10 * Received Loans and advances of Rs. 515.88 million * The cash generated from Operations of Rs. 954.59 million is an indicator that it has been able to recover the cash for the sales made. Investing Activities * There has been a significant drop in purchase of Fixed assets compared to previous year * A decrease in the purchase of current investments compared to previous year * The net cash is positive during the current year compared to previous year. * There is a reduction in the fixed purchased from previous year ie., Rs. 92.93 million in current year v/s Rs. 124.01 million previous year. This could be attributed to the economic slowdown the company decided against investing in fixed assets. * The proceeds from aircraft sales has also dropped, this could be either because of the low value or due to economic slowdown or number of assets sold were relatively lesser * It is also noted that there is a drop in the interest income by almost 50% Financing Activities * There is a drop in short terms loans and proceeds from long terms loans as well compared to previous year * There has been an increase in the repayment of loans during the year * Reduction in loans taken during the year * Due to the above reasons net cash flow is negative. * The overall net change in cash in Negative. The Airline also reported a loss during the year. * The repayment of unsecured loans or out flow as a result of unsecured loans during the year 2009-10 was only Rs. 332.70 compared to Rs. 1366.66 in the previous year 2008-09 * The company accepted fresh secured loans of Rs. 339.89 million compared to only Rs. 32.70 million in the year 2008-09 Reference http://www.economywatch.com/world-industries/airline/ www.jetairways.com www.spicejet.com ?? ?? ?? ?? Page 16 of 16 ...read more.