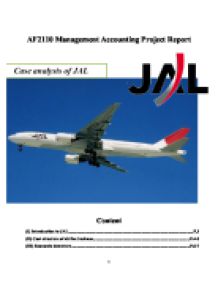 AF2110 Management Accounting Project Report Content (I) Introduction to JAL P.3 (II) Cost structure of airline business P.4-5 (III) Economic downturn P.6-7 (IV) Competition from budget airlines (From international airlines) P.7-11 (1) Sales of Ticket (2) Airline Service (3) Airport fees (V) Airline reorganization P.11-12 (VI) Ethical issue involved in employment practice P.12-13 (VII) Suggestion and conclusion P.13-15 (1) Reduction in labor cost (2) Reduction in fuel cost (3) Route restructuring (4) Cooperate with travel companies (VIII) Bibliography P.16 (I) Introduction to JAL Japan Airlines International Co., Ltd. (JAL), is the flag carrier of Japan, with its headquarters in Shinagawa, Tokyo, Japan. The JAL Group's operations include scheduled and non-scheduled international and domestic passenger and cargo services to 220 destinations in 35 countries worldwide, including codeshares. The airline group has a fleet of 279 aircraft, consists of mostly Boeing aircraft; In the fiscal year ended March 31, 2009, the airline group carried over 52 million passengers and over 1.1 million tons of cargo and mail. In 2009, Japan Airlines suffered steep financial losses, despite remaining Asia's largest airline by revenue. As a result, the airline embarked on staff cuts and route cutbacks in an effort to reduce costs. The carrier also received a �100 billion credit line from the Japanese government that year. The on-going financial crisis broke out in late 2008 and swept all over the world. The deteriorating economic environment imposes heavy pressure upon JAL's customer volume. JAL applied for court protection under the Corporate Rehabilitation Law on January 19, 2010. JAL expects to receive a �300 billion cash injection and have debts worth �730 billion waived, in exchange for which it will cut its capital to zero, cut unprofitable routes and reduce its workforce by 15,700 employees-a third of its 47,000 total. JAL recorded that the operating income in the air transportation business declined by �139.5 billion from the previous fiscal year (2008), to the �60.8 billion. ...read more.

price charged by Hokkaido International Airlines. price charged by JAL. (2) Airline service Many budget airlines choose to use only few types of plane with a simply designed. This helps companies to save money on pilots and mechanics training, since they do not need to provide extra training programs for operating different types of aircraft. Most of budget airlines also make an unreserved seating arrangement which can reduce the overhead necessary to run a booking system and the operation issue on the planes. Some optional equipment in flight such as entertainment system may not be provided in the air flight. This can reduce the acquisition price as well as the cost of maintenance. Moreover, most of the budget airlines only offer few of routes. For instance, Oasis Hong Kong Airlines Limited was a now-defunct long-haul low-cost airline. It operated scheduled services to London Gatwick Airport and Vancouver International Airport from its hub, Hong Kong International Airport. Besides removing the non-frills, some budget airlines have started to charge many services on board such as offering drinks, meals or providing blankets, earphone. Therefore, customers can choose and pay what they want. This enables budget airlines to offer a lower fare. (3) Airport fees Budget airlines also cut cost from airports operation. Airports in major cities are usually in high demand and charge higher fees. Due to it, most of low-cost carriers will choose a secondary airport which is smaller but cheaper. It can reduce the operating cost in airport fee and related costs such as parking and maintenance cost. Budget airline use a mobile stairway which is cheaper to avoid using jet ways to board and alight passengers which is charged a higher airport fee. According to JAL's annual report 2009, JAL plans to reorganize the group's Tokyo-based airport-handling company in light of expansion of Narita Airport and expansion and inaugurate of the operation of international scheduled flights from Haneda Airport. To Sum up, most budget airlines have cut their cost successfully by the methods above. ...read more.

By using crude oil futures contracts to hedge their fuel requirements, it can help to save a large amount of money. A good example is Southwest Airlines. It was able to save a large amount of money when buying fuel as compared to rival airlines when fuel prices in the US rose dramatically after the 2003 Iraq war and Hurricane Katrina. Optimizing flight route can also help to reduce oil consumption. JAL can not only reduce the time of flight but also reduce the flight distance. By aircraft downsizing, it can also help to reduce the fuel cost. JAL can use highly fuel-efficient aircraft, reducing the weight of on-board items, and increasing the frequency of aircraft engine cleaning. 3) Route restructuring JAL's operation is under government regulation. JAL has some commitments with Japan government about the airline service. Although some airlines are not profitable to operate, JAL still need to provide service on it. There are about 70 inland airlines are suffering from great financial deficit. Therefore, it is time for JAL to restructure route by eliminating the routes that are low usage. By doing this, it can reduce the operating expense. 4) Cooperate with travel companies The demand of business class seats was falling sharply. It made JAL suffers great loss in 2009. The best way to increase the revenue is to stimulate this demand. JAL should proactively offer products and services that are attractive to customers who travel for leisure. JAL should focus its effort on securing demand for inbound travel into Japan by signing more contracts with local companies. It should cultivate tourism demand by forming alliances with local travel companies. Conclusion Under extraordinary downturn in the global economy, JAL is suffering from economics from a tough period. It made the revenue decrease sharply and its cost structure become unfavorable. Through the government subsidization and cost-cutting measure, we hope that JAL can reduce the fixed cost spending and expand the source of income in order to overcome this tough period. ...read more.