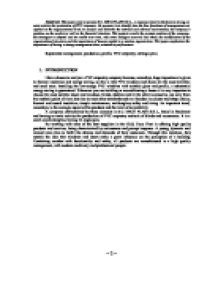 Management functions case study. This paper aims to present S.C. DECO PLAST S.R.L., a company based in Bucharest, having as main activity the production of PVC carpentry. Its purpose is to identify how the four functions of management are applied at the o

Abstract: This paper aims to present S.C. DECO PLAST S.R.L., a company based in Bucharest, having as main activity the production of PVC carpentry. Its purpose is to identify how the four functions of management are applied at the organizational level, to analyze and describe the internal and external environment, the company's position on the market as well as the financial situation. This project reveals the present position of the company, the strategies it adopted and its results over time, why some changes occurred and when, the modification of the organizational structure and the importance of human capital in a modern organization. This paper emphasizes the importance of having a strong management team, oriented to performance. Keywords: management, production, profile, PVC carpentry, strategic plan. 1. INTRODUCTION I have chosen to analyze a PVC carpentry company because, nowadays, huge importance is given to thermal insulation and energy saving, so this is why PVC windows and doors are the most available and used ones. Installing the low-energy PVC windows with suitable glass and profile, a substantial energy saving is guaranteed. Whenever you are building or reconditioning a house it is very important to choose the most suitable doors and windows, blinds, shutters and all the other accessories, not only from the aesthetic point of view, but also to meet other standards such as: freedom in colours and shape choice, thermal and sound insulation, simple maintenance, anti-burglary safety and airing. An important trend, nowadays, is the ecologic aspect of the products and the level of recyclability. A company characterized by these elements is S.C. DECO PLAST S.R.L., based in Bucharest and having as main activity the production of PVC carpentry and sale of blinds and accessories. It is a small-sized enterprise, having 22 employees. By working with ones of the best suppliers in the field, Deco Plast is offering high quality products and services, being characterized by seriousness and prompt response. ...read more.

In 2010 the total value of PVC profiles market reached approximately 450 million euro, representing a decrease of almost 55% as compared to 2007. In three years of crisis more than 10,000 workers have been dismissed and the market fell by 70%. This happened because of the drop of construction industry itself. Most projects started in 2007-2008 were continued until finishing phase, including installation of insulation carpentry. All segments of the market for construction materials had drastically decrease in these three years, with peaks that reached 30%, but PVC carpentry market is the only one which dropped its volume by over 40% in a single year, namely 2009. PVC market sky rocketed in 2007, like many sectors of the construction industry. The volume of one billion euro of that year was supported by the 6,800 companies in the area. In these years of economic crisis, insulating carpentry market fell sharply to the level of 300 million euro, representing the forecast for this year. More than 10,000 workers remained unemployed, out of a total 40,000 employees in 2008. The ownership of the industry representatives say that these years have failed only 1000-1500 producers, but market players talk about the disappearance of 80% of the 6,800 active companies in the heyday. Out of this number, 100 are companies producing more than 80 - 100 units per day. Because of the inactivity in the construction industry and the rejection of the rehabilitation projects, PVC market does not provide signs of recovery in less than two years. Fig. 5. The evolution of insulating carpentry market for PVC windows and doors (2005-2010 period) Source: Ziarul Financiar (1 Sep. 2010), Bucuresti, "Evolutia pietei de tamplarie termoizolanta pentru ferestre si usi din PVC, in perioada 2005-2010". 3.2. Clients S.C. DECO PLAST SRL provides services to customers who appreciate the seriousness and prompt response, according to the highest quality standards. Through its activity, the company offers its services to clients in Bucharest and across the country, providing quality products and services tailored to each and every need. ...read more.

A direct way used by Deco Plast to measure the customer fulfillment is feedback recording. The clients are asked about the level of involvement of the personnel in solving the problems that arose during the collaboration, the extent to which the company is prepared to encounter and solve the difficulties, and also the place of the organization on PVC market. An indirect way of controlling the quality of the services the company offers is through the level of customers choosing Deco Plast's other products and facilities, over time. The company adopted a concurrent control system, continuously monitoring if the objectives are met, errors avoided and complexity faced. During the collaboration, the commercial worker who concluded the contract keep in touch with the customer, mainly by phone, and whenever a problem occurs, he/she solve it immediately, by speaking with the right people or be sending there an engineer to see what is happening. Controlling is a continuous process. Not all the deviations of controlling are taken to top level managers, only key areas deviations which are beyond the specific range. 6. CONCLUSION Given the position Deco Plast occupies on PVC carpentry market and the competitive advantages it has towards other companies from the same sector, the organization may become the number 1 choice of any client who appreciates seriousness and prompt response. Over time, the company managed to grow and to offer its clients a wide variety of products and services. It is characterized by professional employees, high-quality products and a young management team, oriented on customer satisfaction. In my opinion, the company adjusts quickly to changes in external and internal environment due to the efficient management team and the employees who play an important role in the success of the organization. It is still in development, with clear objectives set up for the foreseeable future and beyond. It intends to develop strong partnerships both in Bucharest and other cities such as Ploiesti, Brasov, Slobozia, Calarasi, Giurgiu, etc. ...read more.