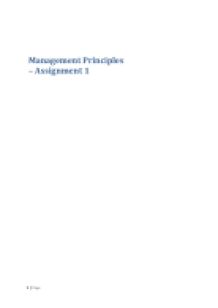 Management principles and theories and their application to the construction industry.

﻿Management Principles ? Assignment 1 ________________ Contents Introduction ? Page 2 Task 1 ? Page 3 Task 2 - Page 16 Task 3 ? Page 17 Task 4 ? Page 21 Conclusion ? Page 28 Bibliography ? Page 30 Introduction Many people have over the last 10 ? 120 years have added their theories to The Principles pf Management, who are known as the Management Pioneers. They were the first people to study work place activities and behaviour on a major scale. Their work and experiments carried out under the auspice of Scientific Management Principles are still relevant today, along with their theories and techniques. In this assignment I have indicated the major pioneers and have described their theories relevant to the construction trade. Notably I have included Henri Fayol and how his theory can help managers in the contemporary construction trade. Most construction companies are represented by an organisational chart. I have also included a number of organisation structure concepts. I have used one company from each Construction and Civil engineering, describing the jobs they undertake, the size of their projects and the roles and responsibilities within their management teams Task 1 What is it that motivates people to get up and go to work each morning? There are many people who take pride in their work and get great satisfaction from it. Others may see it as a burden and simply work to survive. Management theorists and social psychologists have studied this question for decades, attempting to find successful approaches to management. Douglas McGregor In the 1960?s, social psychologist Douglas McGregor of MIT invented two contrasting theories on human motivation and management: The X Theory and The Y Theory. McGregor explained that Theory Y was the basis of good management practice, arguing that employees were simply not cogs in the company machinery as Theory X companies seemed to believe. The theory?s look at how a manager?s perception of what motivates his or her team members affects the way he or she behaves. ...read more.

Frank observed the basic movements to lay a brick effectively and isolated them from the movements which weren?t. He then introduced his findings to the bricklayers and found that the ones that followed his recommendations increased their output from 1000 to 2700 bricks a day. He took this along with the experiences he had with Taylor and began a career in scientific management consulting with his wife. They continued to refine their methods and later used a motion picture camera and split second clock to capture specific motions which they considered the best possible way to complete a given task. Imagine what this could do for you as a manager. If a standard set of movements, practices, methods or procedures were given to your workers how much could they accomplish in their shift? What about a in a week? A month? A year? And how much more profit could be accumulated. What the Gilbreths discovered by studying the motions of others was a way to immediately impact the bottom line for the better. There was no fancy equipment to buy, elaborate marketing schemes to draw up, or innovative products needing to be developed. All it required was time observing, analysing and scrutinising effective movements of workers while they worked. WORK SMARTER, NOT HARDER! Task 2 Henri Fayol Fayol was born in Istanbul I 1841. He began working as an engineer at a large mining company in France when he was 19 where eventually he became the director. He developed what was to be considered the 14 most important principles of management. They explained how managers should organise and interact with their staff. In 1916 he published these 14 principles of management in the book ?Administration Industrielle et Generale?. He also created 7 primary functions which went with the principles. Even though it is one of the earliest theories of management it still remains one of the most comprehensive with Fayol being considered one of the most influential figures in the modern concept of management. ...read more.

Guidance is given to employees at all time. Because of this they know the report relationships that control the work flow in the company. A formal outline of the organisation makes adding new positions very easy and flexible. This helps operations to run smoothly and the communication becomes easier. When there is no structure at all, employees do not know who to report to when they have issues. There is also confusion with the responsibility of certain matters. All this confusion will make the business suffer. It leads to poor communication, low productivity and unaccountability. If there is a good organisational structure, operational efficiency is improved. This is because clarity is brought out to employees of each level of the company. It also outlines which promotions are on offer. Therefore, there is a solid employee advancement track for every entry level worker. Another important factor is that it makes decision making easier. This is because there is a protocol that is followed in the whole issue. In the flat type which is ideal for small companies, the manager can talk directly to the managing director and the assistants are two levels below the director. This means decisions can be made quickly and communicated to different departments. It is extremely important that communication is present in every organisation. This is only possible if there is an organisational structure. It enables distribution of authority which enhances communication within the organisation. If a new employee joins the company they immediately know who to report to from the word go. Most organisations will funnel their communication through the department leaders. With a good system, the evaluation of employee performance is better. This is down to the adequate supervision available to evaluate the work in each department. The supervisors can assess the employee?s skills, how they interact with other workers and the time it takes them to complete a task. This makes organisational structure worth investing in. Apart from the features I have explained above it also allows a company to keep at a par with the current market situation determining it a successful or unsuccessful company. ...read more.