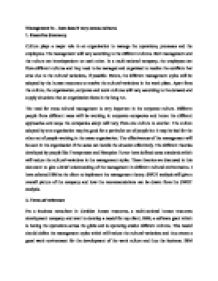 Managing Cultural Differences. The different theories developed by people like Trompenaars and Hampden-Turner have defined some standards which will reduce the cultural variations in the management styles. These theories are discussed in this document to

Management in - how does it vary across cultures 1. Executive Summary Culture plays a major role in an organization to manage the operations, processes and the employees. The management will vary according to the different cultures. Both management and the culture are interdependent on each other. In a multi-national company, the employees are from different cultures and they need to be managed and organized to resolve the conflicts that arise due to the cultural variations, if possible. Hence, the different management styles will be adopted by the human resources to resolve the cultural variations in the work place. Apart from the culture, the organization, corporate and work cultures will vary according to the demand and supply situations that an organization faces in the long run. The need for cross cultural management is very important in the corporate culture. Different people from different races will be working in corporate companies and hence the different approaches and ways the companies adopt will vary from one culture to another. The culture adopted by one organization may be good for a particular set of people but it may be bad for the other set of people working in the same organization. The effectiveness of the management will be seen in the organization if the same can handle the situation effectively. The different theories developed by people like Trompenaars and Hampden-Turner have defined some standards which will reduce the cultural variations in the management styles. ...read more.

The universal rules had been defined by the organization to create a global environment such that the employees will have standard sets of rules and regulations which need to be abide by the same to create a friendly work environment. Communitarianism versus individualism IBM encourages communitarianism which enables the employees to work as groups. The individualism will develop selfish mind among the employees and thus ruin the relationships among the employees. Hence, the company had developed the policies related to communitarianism such that there won't be any scope for the individual focus rather all the employees are treated with same respect, irrespective of their cultural backgrounds. Analyzing vs. Integrating IBM follows the way of integrating when it comes to the employees of the organization. The integration will always be needed to create a feeling of brotherhood in the organization. The employees are to be treated as one and thus build a better relationship for the development of the company. "United we stand and divided we fall" will be the motto of the company in building a strong integrated team. Inner-directed vs. Outer-directed Inner directed will enhance the people to think and judge with their own minds and thinking will be given the utmost priority. But outer directed will reflect the real work decision making based upon the experiences of the employees. ...read more.

e. The corporate culture varies in different geographical locations according to the local environment and hence the employees should be trained according to the local as well as the global strategies to improve the performance as well as reduce the indifferences among the employees. f. Implementation of the global strategies for the operations is the better solution rather than designing the local strategies. This will increase the efficiency of the management in IBM. 6. Forecasts and Outcomes Following the above recommendations, IBM can see the effective change in the short term as well as long term. But the company will be in a healthier position if it adopts the changes for longer terms. Communication will play a major role in the effective implementation of the proposed changes. IBM will create a friendly environment for the employees which involve the effective interaction among the different cultured environments, motivation and leadership skills improvement, interactions among the different groups and thus promotion of the universalism among the employees as well as the company. The more is the transparency in the management processes, the more will be tendency of the employees to build a good company. The employees are the key resources of the company and they will build up even a better organization with their traits and this will be seen in the nearest future if they are treated equally. The different problems that arise due to the communication gap will be completely eliminated with the equality among the employees. ...read more.